This week’s illustration is from the Kickstarter for the surreal photo project, “Horace and Agnes: A Love Story“

Ahem. I think that just perhaps my coffee was a little too strong this week, or maybe all the twerps finally discovered Kickstarter, this week’s blog is rich with irritation and put-upon sighs. My apologies. There are some real gems, too, I’m in love with the weird, mass-produced charm of “Horace and Agnes,” and “Snorffles n’ Meeps” is amazingly cute.

But apparently June is cynicism week.

I’m worried about the effect of LeVar Burton’s amazing campaign for Reading Rainbow 2.0 on the greater crowdfunding landscape. That, and Veronica Mars conclusively prove that crowdfunding can work for the Big Guys, too. Thank the gods that large, commercial projects can use Kickstarter, I was starting to think the playground would stay this horrible wasteland, devoid of creativity.

It’s the coffee again. Y’all should keep me away from it.

I grew up with Reading Rainbow, and do like it a lot, it’s exciting to see it evolve into a new form. But it’s hard not to imagine the success of this project–$3 million and climbing, and it’s possible–looking at Kicktraq’s metrics–for RR to break the Kickstarter record, a $10 million wristwatch project. Will big names crowd out smaller funders? It seems to be happening with video game and tabletop RPG funding. We’ll see.

Reviews this week: Alien invasion with “Beast Mode” and a few projects I have nothing nice to say about. 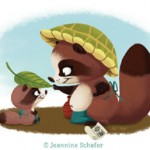 Horace and Agnes: A Love Story (Ends: 7/13/2014)
You know that rubber horse head? It’s practically a meme? Immerse yourself in its world. Meet its loves, its life, its travels, its family.
This is…magnificent and strange. I want to do a full write-up of it. I hope there’s time this week.

Doberfrau (Ends: 7/15/2014)
The dobermans of Munich, a photography project celebrating the Doberman breed and Munich.

Furries: Life But With Fur (Ends: 6/15/2014)
TV pilot WIP for Fox: A furry “mockumentary.”
This is so obviously on-topic for Furstarter that I have to post it, but the project feels pretty malicious in nature, more sensational coverage that the fandom doesn’t need.

Royal Dinosaur Playing Cards (Ends: 6/26/2014)
Something for the Saurian in your life, dinosaur-themed cards with dinos in courtly regalia
Past goal!

Cowards and Carrots (Ends: 6/27/2014): A medieval resource management/training game where idiots and cowards are trained to fight the terrible Dragon-Bunny, who is exactly as cute as a dragon-bunny should be.
TimeWalk: VR Playground (Ends: 7/28/2014): A virtual world as complex as the real world. The graphics and video are terribly “Uncanny Valley” and I don’t think anyone here wants an *exact* copy of themselves, but it’s an exciting idea.

The Shadow Appear’s: The Righteous League’s First Comic! (Ends: 7/26/2014): This has been a bad week in the category of ‘things Corbeau wants to make fun of.’ The art in this one is perfectly dreadful. The anthro…dog…thing…is going to give me nightmares. I don’t want to even talk about the punctuation, I had to have a lie-down.
Animal Shelter Project (Ends: 7/29/2014): A “buy me a fursuit” beg not-so-cleverly disguised as a charity. Please, don’t be this person.