This week’s illustration is from “Fell,” tabletop players-vs-board game now on Kickstarter 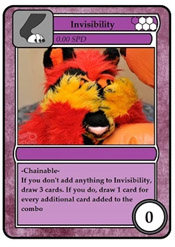 I’m curious about how to approach the game, “Fursuit Frenzy.” There’s a lot about it that I can agree on—the creator wants to make a nice, streamlined little game for conventions that isn’t based on Furotica’s weird harem-building dynamic and that isn’t fundamentally pornographic. On the other paw, the creator has a lot of the dark snark that makes it hard to know whether a project’s serious or not. That, and there’s the masochistic hate-love-hate relationship some people have with Furry that makes them sit at the edge and mock it.

Dear 4chan and friends, the only thing less cool than splashing in an inflatable wading pool is sitting at the edge of a wading pool making fun of the people in it. Just saying. Either way everyone involved is a bunch of children, but at least the wading pool’s kind of fun.

Anyway, I just don’t know if this is real or not. If it’s a hoax, the creator spent a lot of time making up rules. They seem kind of complex–a little too much Pokemon, not enough Germany School of Board Game Design. If it’s real, I’d be remiss if I didn’t give it a callout, but there’s some venom here that’s hard to reconcile with the product. I dunno. At $25 out of a $500 goal it may not matter.

Reviews this week: Cutesy fantasy gay dating sim “Fantastic Boyfriends.” Oh, I get it, fantastic. Corbeau is slow on the uptake this week.

Give Life To My Creatures (Ends: 7/26/2015)
Surreal french critters on print and postcard

Kings of the Wasteland (Ends: 6/18/2015)
Web-to-print of #2 of Del Hewitt‘s anthro post-apocalypse webcomic

Dreamkeepers #4: Descent to the Archives (Ends: 6/19/2015)
The latest title in the anthro/dreamscape webcomic/graphic novel series, Dreamkeepers

Fandom Convention History Project (Ends: 6/22/2015)
A “history of…” comic focusing on the fandoms of Maryland and DC, including Anthrocon, Bronycon, Otaku, Furthemore…
Slow start on this one, probably not viable–doesn’t look like the creator is really working all the angles. Neat project if you are interested in the greater Fandom of Fandoms.

Moonu Animated Comic (Ends: 7/25/2015)
A children’s comic project with 2D animation and a graphic novel layout
While there IS an anthro rabbit-thing, this is more interesting because it’s an art style I don’t often see on crowdfunding sites

Fursuit Frenzy (Ends: 6/19/2015)
A rock-paper-scissors based fighting card game with lots of fursuit photography
I’m not sure if the artist really has permission to use these photograph likenesses. Regardless, there’s no way to BUY this card game in the Kickstarter itself, which is probably a weakness in the marketing strategy.

Fell (Ends: 6/27/2015)
A mix-and-match boardgame of players vs. huge, primordial monsters
Not super-furry, but the pencil art is good and fantasy/monster is a combination that dips easily into the anthropomorphic.

Fantastic Boyfriends (Ends: 6/29/2015)
A gay-themed mobile JRPG: One young man saving the world with his very sturdy boyfriend.
Cute stuff on the game’s Character Page, including werewolves and a pretty cute world-crushing serpent. Overall kind of Osamu Tezuka in style. 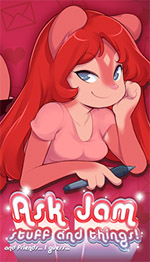 Iberian Wolf Recovery Center (Ends: 7/2/2015): Raising money to buy a 42-acre site in Portugal to preserve a wolf sanctuary for the Iberian wolf.

What’s Corbeau Backing This Week?
Certain sad little xoloitzcuintli are still “pursuing employment opportunities” and shouldn’t even be looking at Kickstarter. That being said, the second I get a job, I’m going to dump $100 or so on these guys, because I love the look of the product, I love induction burners and kitchen gimcrackery, and I really love tea. This is a perfect combination of design and tea. So beautiful.