Illustration from Fearsome Creatures of the Night, now on Indiegogo

A sincere apology for the recent unplanned hiatus. I went from a period of unemployment to getting a new job—with the first, it’s hard to concentrate on writing and creativity. With the second, there just isn’t time for it!  So it’s been almost a month of no updates and there’ve been a LOT of new projects. So consider this post the blogs I wish I could have written, and thank you for your patience over the month.

This is my 10 things I missed. In no particular order. 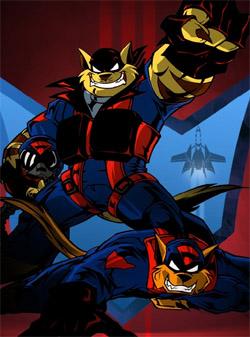 The big news, furry-wise, would have to be the upcoming relaunch of SWAT KATS, which launched yesterday and blew past its lowball goal. This franchise is super-popular with furries that grew up in the 90s, which is, as I understand it, most furries. Is it a full series reboot? Not really, it’s five episodes of a mini-series, and maybe if it reaches the breathtaking super-goal of $1.5Mil, a direct-to-internet movie. But it’s a great return to a beloved commodity. I have to say I do not like the Kickstarter page, which uses huge graphics that don’t have a lot of text to them, so it’s hard to figure out what’s going on. But to each their barking points, ignore me, go love the thing. 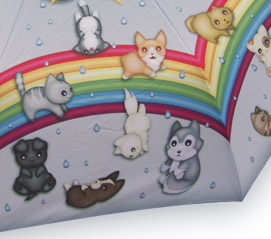 2) The Cutest Umbrella in the World, Probably.

Oh…my…dog. It’s covered with tiny kittens and chibi puppies, and there is a huge rainbow. If I bought this, I would just be waiting for it to rain, all the time. And it never would because I live in Texas. I would have to put my sprinkler out in the front yard just to have an excuse to use this amazingly cute accessory. Click it. “Awww” with me.

I’m not particularly a pig fan. Abstractly, “Babe” is pretty cute, but “Babe” has, you know, a make-up artist. But in real life, pigs are kind of awful. And Oink, grim, action-packed, amazing train wreck of a comic does not pull punches on that front. The art is amazing, easily up there with any of the fantasy/comic illustration greats. You can, of course, get Oink on Amazon in paperback, but if you want the full collectible art edition, this is going to be your chance. 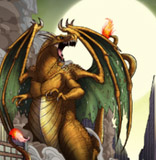 4) Squirtle! Use Watergun on Tokyo!

If you love pokemon, or Kaiju, take a look at Popzilla, a “what-if” art book of giant, city-stomping monsters that evolved from Pokemon classic critters. The main publicity spread has Charizard, Bulbasaur, and Warturtle, and they are…actually…frightening. Great detailed illustrations, pretty high quality stuff. One question I would ask the creator is, “are there non-pokemon in this collection?” He’s being cagey about what’s actually in the artbook and portfolio, with some wiggle room on the content. Probably to keep Ash’s Lawyermon off his back. Lawyermon’s “Cease and Desist” attack is strong against derivative-type pokemon, seriously. 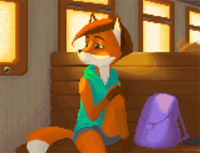 There’s an image on Foxtail’s project page that really sings for me, showing the main character, Leah, in a bus station or train station. The lights of a moving vehicle strobe through the windows. She blinks. It’s lovely. That one image makes me think of the gentle world of Miyazaki films like Totoro and Spirited Away, which can afford to be evocative without being filled with constant action. They have a beautiful stillness. There’s probably a Japanese word for it.

All that said, are we, as a culture, ready for 8-bit graphics? Really? I’m not. I love my cyan and magenta graphics, thanks, I can’t handle this advanced technology.

The main character is a really nicely done anthro fox girl, visually appealing, with a world you could fall into. Does this game have anything new to say? I don’t know, I’m not enough of a gamer to know honestly, but it is a nice bit of visual. 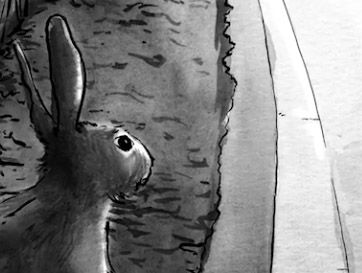 In some ways, the faintly post-apocalyptic game, The Warren is part of a long lineage of rabbit role-play, beginning with Bunnies and Burrows, which at 1976 is only scant months after the invention of the tabletop role-playing game as a concept. Playing helpless creatures is compelling! Steve Jackson released the game again as a license in 1992, and other games—Mouseguard stands out in particular, as does the new “Secrets of Cats“—invite us into the small furry world of nature. So is The Warren new? No. But it doesn’t need to be.

7) “More bunny than bunny” is our motto.

Nice to see a return to classic cyberpunk. Metazoa is a graphic novel/series set in a dark dystopian future, where animals have risen to sentience, but the lion is most certainly not laying down with the lamb (unless the lamb has a few hundred nuyen to part with.) The art style is grungy and crude, selling this as a furry comic is kind of tricky—our art standards for animal people are pretty high. But as a gritty sci-fi indie comic, it holds its own.

8) Everything You Ever Wanted to Know About Fans

No, I don’t think this one is going to succeed, because it crashed and burned at a $1500 goal and it’s not doing so good at $6500…and I don’t think I’ve ever seen a failed Kickstarter increase its goal on its next trip on the merry-go-round of funding! “Fan Con History” is a graphic novel format telling of the history of convention culture, running from early Sci-Fi fandoms through the rise of the Bronies. I’m actually wondering why they focus as much as they do on the bronies, I like bronies but it’s just one fandom in an age of dozens of microfandoms. But it’s an interesting test case study, if nothing else.

Like any project of this nature, it’s going to have a powerful spin based on the narrator’s personal beliefs and approaches (there’s a category for media fandoms that includes furries but doesn’t include bronies, which is just peculiar to me, not to reiterate.) But if you’re interested in the greater community of fandoms–I like the word “fendom,” it’s nicely collective–this project is a fun investment.

Dale of Merchants is a fast-moving deck-building game which looks a fair bit like a furry, simplified version of Dominion, a product which launched the deck-building game concept. I’m on the edge of investing in this one. The art is simple and engagingly rough, but the colors are particularly fantastic, rich watercolor which double-underlines the antiquated feeling of the game.

10) Triumph of the Banana

This is absolutely a just-me thing. I know it. But last year I wrote an article about crowdfunding for adult projects, it’s kind of a focus for me and for our fandom generally, so I have been watching—and DO NOT CLICK THIS LINK, it’s just, you know, seven specific inches of guy—this Indiegogo project pretty closely, to see if or when it gets taken down. It hasn’t yet, which kind of amazes me. Does this set the standard for nudity on Indiegogo? No, not really, it may just have gone under the radar. But it’s interesting about what it could say about how Indiegogo polices adult projects. Yes, it’s just a picture of someone’s wang, but it’s been up for well over two weeks. The project page, not the wang.

Seriously, I’m interested in this for the crowdfunding aspect. Not the product. Promise. Although it is a quality product.

Oink (Ends: 8/6/2015)
Fantastic illustrations in this action-fantasy comic about an axe-wielding pig and his quest for vengeance.
Over goal! Great illustrations. I regret not doing a full blog piece on this one, there really isn’t time now :(

The Battle of Blood Moon #4-6 (Ends: 8/11/2015)
A graphic novel of wolves vs werewolves in an apocalyptic/paranormal world. More at thebattleofthebloodmoon.com.
Illustrations are a little rough at times, but project is past its modest goal.

Tabby Sketchbook Graphic Novel (Ends: 8/18/2015)
Cat fans might have backed Kok’s last graphic novel, “Tabby“, a story of romance, action, and so many cats. This graphic novel is a bit more “behind the scenes” of the artist’s process, but just as cute. With a new story, “War and Peas.”
Over goal!

Fan Con History (Ends: 8/22/2015)
A graphic novel history of the greater fantasy fandom, with special nods to Pittsburg, Anthrocon, and Bronycon.
Second attempt at this one, and a project I’d love to see succeed!

Metazoa (Ends: 9/5/2015)
An indie comic set in a dark cyberpunk future, claustrophobic and Blade Runner-inspired, where animals have evolved sentience–but not a peaceful society.

Raining Cats and Dogs Umbrella (Ends: 8/22/2015)
Hands down, this umbrella loaded with charming chibis is the cutest umbrella in the world.
Over goal!

Build (and burn) the Minotaur! (Ends: 8/6/2015)
A fun art project from the world of Burning Man, a giant (and flammable) minotaur to build and burn.

Dust Bunnies (Ends: 8/19/2015)
Short film project, 3 minutes of friendship, bravery, and an evil maid with a featherduster.
Over goal!

The Warren (Ends: 8/4/2015)
A tabletop RPG about intelligent rabbits navigating a dangerous world.
Over goal! This may be another iteration of the old game from 1976, or something new and wonderful.

Roadkill Rivals (Ends: 8/20/2015)
A fast-paced multiplayer card game of animals vs. fast-moving, oncoming vehicles. There can only be one survivor.

Furball Rampage (Ends: 8/29/2015)
A card game of mechanized animal monsters, mayhem, and silly illustrations.
As a grammar nazi, there are elements of this project page that trouble my dreams…

War And Rabbit (Ends: 9/22/2015)
A strategic matching game very loosely based on “War”, with bunnies locked in battle with…carrots?

Fearsome Creatures of the Night (Ends: 8/9/2015)
A dark and tim-burtony sidescroller/explorer of a Jackalope and the scary creatures of the night.
This is a pretty game, and it was daring of them to use “fixed funding.” I’m sorry it didn’t work out, it looked like it should have done better. 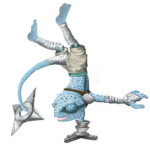 Wolfsong (Ends: 8/13/2015): A fantasy JRPG style game in the style of, well, other JRPGs. With three anthro races (snake, wolf, cat) and some decent artwork I think it’s include-able, but it’s a long way to goal.
Random Encounters – The RPG (Ends: 8/17/2015): A silly cooperative RPG card game with bosses and loot and a distinctly vintage Nintendo feel. And hey, there’s a furry character!

Negger’s Graphic Novel (Prelaunch): If you’re a lion fan or like cute South American critters, you probably already know about Negger (nsfw). With the good dogs at Sofawolf Press he’ll be launching a kickstarter soon!
Another BadFurry Misadventure? (Prelaunch): Okay, I don’t know what this one is going to be! But BadFurry had a lot of success with their unguide to the fandom last year, and they’re up to something, coming soon.

What’s Corbeau Backing This Week?
I can haz job! Yay! The first thing I’m dumping money into is the Fan Con History graphic novel, the history of the fandom of fandoms. Except, really, I’m not, because I don’t imagine it will make goal. Don’t get me wrong, I’d love to get a copy of this one! But I’m not worried about missing a rent check over it.