The foxes of speculative fiction: Déjà Vu and Flashy the Overlord

Apparently the summer slump is over! Lots of new projects–films, comics, video games, and a surprisingly furry project on Offbeatr…no illustrations from that one, though. This week, two anthro graphic novels, one from an artist on FA, one from a furry outsider.

Déjà Vu is a sci-fi/fantasy, the story of Cal and Saku, a mismatched pair of girls trying to return a corrupt society to its peaceful roots. The overall project–12 comics, each about 32 pages long–promises a complex story, the idea of reforming a world is a lot trickier than saving it…

I’d like to ramble at length about this project, but there’s not a lot of material on it. The artist, Fox Holliday, is unfortunately stingy with the details. She’s sharing pages on FA and through backer

updates, and what we can see right now is still in a rough state, but her concept art is clean and approachable, obviously influenced by a manga style but hasn’t sacrificed its soul to it. I’m looking forward to more updates.

Holliday’s Kickstarter campaign is unusual in a few ways. It’s a really tight campaign, with a 20-day countdown to completion, and a fairly high goal for a graphic novel-type KS. Secondly, it’s a PDF form graphic novel with print as its stretch goal. That’s a rare approach, and may cause some friction with the people that shop at the Mall of Kickstarter, though it may be a more realistic approach to a project of this size. I wouldn’t be surprised to see a relaunch of this campaign to fund volume one, or maybe a version backed by one of the big furry publishers–regardless, it’s worth a look for strong artwork and a plot that feels much more human, perhaps ironically for a furry title, than most overly-epic adventure titles. 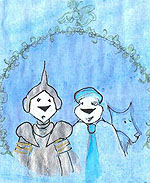 I think we’re a little spoiled in the fandom by the interactivity of our little shared world–our imaginary selves can get picked up by an artist, spun into someone else’s shared world, be incorporated into a “your name here” project…besides showing up at conventions and posting to twitter, furries inhabit a shared fictional world. It’s an interesting bit of parallel evolution when someone outside the fandom creates an anthro title and then opens it up to incorporating the plot twists and character concepts of a community of readers. I wonder if the author, Eric Bernadin, knows what kind of door he’s throwing open!

Flashy is the story of the boy who would be king, Flashy, son of the recently deceased lord Gebo, and his path to the throne. Flashy’s world is touched with fantasy–diverse races, strange and dangerous creatures. And it’s a beautiful world–the art may not be to everybody’s tastes, but the delicate splashes and hues of watercolor are unusual in a graphic novel, and the look and feel is of some of my favorite children’s books, minimalist, abstract, but expressive. More pics, please, Mr. Bernadin, we see them scattered around your table. Quit holding out!

Besides the challenges associated with producing a comic, “Flashy” has an agenda of openness, community, and shared world-building. Is this achievable in a print product, limited by one artist’s time and skill? Even Blotch’s “Dog Days of Summer” project had a heck of a time getting to a conclusion, and it was little more than a sexy summer fling “Choose your (or Diego’s) Own Adventure” story. Audience-driven creativity works well when it’s a shared world, but may bog down a solo effort. Still, community-driven world-building in a graphic novel is so rare that it may be unique, and Bernadin is passionate about the challenge.

Animal Parade (Art. Ends: 9/1/2013)
A faintly creepy interactive art exhibit and collection of colorful, marching animals with huge, staring, dead eyes (All my life I have wanted to be a double-pig early bird. Share this opportunity with me now.)

Rocko, The Christmas Bat (Children’s Products. Ends: 8/21/2013)
Soft and friendly story of a forgotten halloween decoration that wants to be a Christmas decoration.

Flashy the Overlord (Comics/Graphic Novels. Ends: 9/4/2013)
A graphic novel with simple watercolor illustrations about, possibly, coming of age and taking the throne in a fantasy kingdom. (There’s a strong interactive element in this project, community-building and writing yourself into the plot. )

The Ballad of Thundercluck, Chicken of Thor (Film/Animation/Theater. Ends: 9/4/2013)
“Half mortal. Half god. All natural chicken.” Short animated film with a celtic style. Ride with Thundercluck into glory!

Havok & Hijinks (Tabletop Games. Ends: 9/24/2013)
A disturbingly cute card game: you play a dragon hatchling that got kicked out of the parent’s den, and now it’s time to find your OWN hoard!

Deck of Legends (…Just For Fun. Ends: 9/6/2013)
A tarot-sized deck of “standard” playing cards with fantasy artwork, for play and props in RPG tabletop games. More of the artist’s work on DA.

La Divina Caricatura (…Just For Fun. Ends: 10/1/2013)
An American Bunraku-style (Japanese puppet theater) production, a pop opera with a few beautifully done anthro puppets, worth a visit to the IGG for the characters.

the ultimate guide to life (…Just For Fun. Ends: 10/10/2013)
A strangely compelling film journey into a land of cynical, satan-led anthro pigs, vaguely season 2 Southpark, snarky and low-budget. (Well, not just pigs, this is an anthology film, but the two clips thusfar are both pretty fun. Others may vary in quality.)

Hunter Clark’s Sublime Creatures (Ends: 9/1/2013)
(NSFW) An artsy collection of animal-headed women, artistic nudes of mothers, mothers-to-be, and madonnas.
More about the beauty of the pregnant female body combined with animal symbolism than hybrids and anthros, but an interesting take on hybrids and lots of African carnivores.

Caribbean Blue: Volume 2 (Ends: 9/2/2013)
Cat-girls and girl-cats on a tropical island in this colorful manga-style webcomic-turned-print.

Werewolves of Predatory Moon (Ends: 9/1/2013)
Indie low-budget “creature feature” with a pack of werewolves and a commitment to costumes rather than CGI.
I can’t imagine what their faux hair budget is. Check the Predatory Moon website for more images.

No Signal (Ends: 9/12/2013)
Open-world story-driven RPG: Somewhere there is a universe in peril, a universe of plumbers with hammers, ninja tortoises, and dark urban knights. And you must save this universe. Except that your brain has been yanked out and put into a stuffed bear.
$100,000 goal? Really?

Jax the Cat (Ends: 9/1/2013): A children’s comic series of talking cats, and a few talking mice. Very Don Bluth, and like Bluth’s work a mixture of charm and pain.

Wildcats of the World (Ends: 8/25/2013): A web-based interactive resource to spread awareness of the remaining sildcat species.
Save Virachey Park (Ends: 9/10/2013): Campaign to install motion-trigger cameras in Virachey park, Cambodia, to show it’s a worthwhile preserve of endangerd species. Do it for the dholes!