A little bit of grumbling about SWAT Kats, and this week’s new projects…

I’d probably get boo’d off the stage if I’d really taken apart the SWAT KATS kickstarter project. I’ll be honest, I’m not particularly a SWAT KATS fan. Nothing wrong with the show, it just hit me during that time when a high schooler “grows up and stops being a kid” for like three years before retreating back into arrested development. So that’s really just me, and SWAT KATS ranks high on “90s cartoon awesomeness” that the community gets nostalgic over—so I really was excited to see the campaign pop up, and see that it did reasonably well—but I don’t think it was a success.

The initial goal for the campaign was $50,000, which the project managers made handily, probably by day 2. But there was nothing there that promised a single frame of animation–$50K covered “A new series bible, three scripts…and concept art.” The next goal up, at $100,000, was functionally a teaser/trailer promo, two minutes showing what the series might be like.

It’s hard to say if this campaign was, ultimately, an honest one. If the creator has deep pockets and backers in California over and above the crowdfunding, then they can move ahead with what was likely the actual campaign goal, the 70-minute Netflix movie.

For an established property with some legitimate street cred, it didn’t really roll so well, and I think this might have been due to the dubious nature of the goals. And this is a pretty common trap, worth a second look. How many furries would turn out their pockets to support a sketchbook and 15 pages of background and character sketches that they’d likely never get to see? Not many, I think, love for the original series aside. And how many people would pay money to back a trailer? More perhaps, but those aren’t sellable ideas. The sweet spot for this campaign was $1,000,000—the five-episode miniseries. Expensive, but not exactly a moon shot.

Would SWAT KATS have “succeeded” at this higher goal? Well, maybe. It’s a higher goal. It’s not an unattainable one. If they’d failed, I’m confident they would have failed at a higher level. I don’t honestly know if that’s meaningful, failure’s failure, but something about marketing around a miniseries and delivering internal documents and a 2-minute sizzle reel leaves me uncertain and a little disappointed.

Tall Tails Complete Collection (Ends: 9/16/2015)
A 500+ page bound volume of long, LONG time furry artist ‘s fantasy/sword and sorcery comic series. Okay, in fairness she left the fandom, but still draws anthro material.
Over goal. This really is the year for reprints. I blame “Digger.” I’m not complaining, though, just observing. No custom stuff in the rewards listing, unfortunately.

A comic book by Leonardo Pertuzzatti: A space-age sauropod receivs the gift of rationality after being abducted by aliens. And a wrist-mounted blaster.
The art in this one is abstract and pretty, reminiscent of Hellboy in his ‘toonier phases. Worth a look.

Cremisi (Ends: 9/21/2015)
A scifi/western manga, a little bit Trigun, with two cat-eared protagonists, a fem fatalle and a wirey little guy.
Pretty, and it’s been a slow week. Cat-ears on an anime character are only the tiniest but furry… 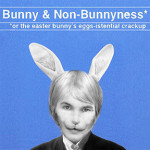 Bunny and Non-Bunnyness (Ends: 9/21/2015)
A short film about existentialism, the nature of art and commercialism, the media, Pop Art and Pop Culture, and The Easter Bunny.
For an oddball project, this is actually doing quite well on its funding, at 1/3 goal!

Get Fit In Your Sleep (Ends: 9/23/2015): This product isn’t a bit furry–it’s just another fitbit clone to gamify calories and activity. But their cyborg squirrel mascot is totally worth the click!