Warning, this ramble is focused on adult content, so consider avoiding the links depending on your context.

One of my focuses for the last year has been crowdfunding for projects that fall outside the Terms of Service. To the best of my knowledge, there is nothing “real” written about crowdfunding for the vague spaces containing suggestive content, artistic nudes, non-adult with nudity, pornography depicting imaginary characters in imaginary acts, pornography depicting real individuals and real acts, and content that claims it’s more ethically sustainable than Big Porn (I believe this is POSSIBLE, but 1) the concept contains a world of moral judgments about pornography and exploitation that I don’t want to unpack, and 2) crowdfunding platforms contain and support user-created projects, and you can’t control that kind of material.) Instead, there are vague Terms of Service, or TOS that are never enforced, or are suddenly enforced halfway through a campaign.

So, one has to rely on precedent—see what’s been acceptable before, and what kind of light that sheds on the practice behind the policies at Kickstarter and Indiegogo. About six months ago I wrote an article on crowdfunding for adult projects, and while I’ve been updating it regularly, these are, like I said, recent and useful examples, worth pointing out.

Most of this long ramble was inspired by my conversation with Kit, who is theirselves working on an exciting concept: a non-profit crowdfunding enterprise with a sex-positive philosophy. This concept is linked to her Effing Foundation for Sex-Positivity, and you can read more about it on Kit’s Tumblr. I was very flattered that my own work on adult crowdfunding became a part of their presentation materials, and it sounds like I’ll be able to collaborate more with Kit on their project.

At any rate, “meeting” Dr Stubbs was a treat, and if you’re interested in this intersection, check out their work!

Reviews this week: “Furries in Space” tabletop RPG HC SVNT DRACONES expands their universe with their first supplement, and a gentle point-and-click game of exploration and foxes, “Foxtail.”

Gamera Vs Zine-Ra (Ends: 8/26/2015)
For the Kaiju fans, a 50th anniversary celebration of fan art and indie comic weirdness from the world of Gamera.

Mission to Cataria (Ends: 9/3/2015)
Strange and almost collage-like sci-fi cat journey into space children’s book. If nothing else, skim the project page for the illustrations.

Rescue Cats #1 (Ends: 8/28/2015)
An action/superhero comic, but instead of crime-fighting costumed humans, the heros are empowered, non-anthro, cats. Hmm.

The Samurnauts: Curse of the Dreadnuts (Ends: 8/31/2015)
Quirky sci-fi fantasy martial arts monkey comic. You know, I can’t do this one justice, but you can get an idea of the plot on their web store.
“Monkey King” inspired comics are weirdly common on Kickstarter. Is this a Thing or just a thing?

Nip and Tuck Redux (Ends: 9/1/2015)
Colorizing the Nip and Tuck webcomic.
This one falls into the “If you want to do this, just do it, don’t Kickstart it” bin for me.

The Pelted Universe (Ends: 9/18/2015)
Fundraising for MCA Hogarth‘s Pelted Alliance universe. This Kickstarter was almost entirely a low-goal “your character here” project and the goodies are mostly snapped up. Good product though!
Met the artist at Anthrocon and fell in love. She ran the “Business for Artists” panel and owns the furry/biz intersection. #bizcrush

Buddy: The Dog Collar Reimagined (Ends: 9/2/2015)
I know it’s for dogs, but I WANT this collar! It’s black and sleek with an awesome color-shifting glowing rim.
Also my mate can track me on GoogleMaps and figure out where I am and how much exercise I’m getting during Furry Fiesta. So I’m not sure if that’s a good thing.

Zipped and Pelted (Ends: 8/23/2015)
The Wulfden Theatre‘s absurdist take on the chlorine gas attack at Midwest Furfest and its aftermath, a play exploring identity, our relationship to animals, and other concepts the furry community does a good job of unpacking.
I have a lot of questions about this one and would like to unpack it in an article, but I don’t have a lot to go on yet. Digging for more information! 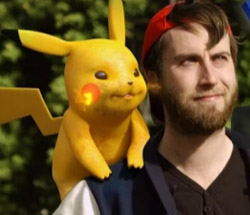 Pokémon: The Movie (Ends: 8/31/2015)
A gently tongue-in-cheek live-action British short film about Ash Ketchum, all grown up.
Is this the Sean of the Dead of the Pokémon world? THEY didn’t say it, but…Check out one of their videos.

Hc Svnt Dracones Extended (Ends: 8/26/2015)
More from the heavily-illustrated and intricate furry sci-fi game HC SVNT DRACONES, an expansion to the universe and core rules.
Way past goal! If you want to learn more about HSD check my article on their last successful kickstarter.

Kittens Mafia (Ends: 8/28/2015)
If you like Werewolf but don’t like slobbery canines, maybe this cats-only party game is for you!

CatTube Famous (Ends: 9/3/2015)
A card game about blasting out the most popular cat videos on CatTube. Great illustrations!

Ponyfinder: Forgotten Path (Ends: 9/4/2015)
Arcane lore and adventure from the dusty past of Everglow, the My Little Pony-inspired Pathfinder RPG setting.
Over goal! You know, I would never have guessed that the intersection of Dungeons and Dragons and Ponies would be this robust. This is probably why I’ve never been able to win the stock market.

ROAN: Pony pulp adventure (Ends: 9/8/2015)
A tabletop rpg set in the pulp 40s, with ponies going to war and exploring strange mayan ruins.
If there isn’t an opportunity to fight against blond, blue-eyed ponies wearing Nightmare Moon’s cutiemark on a black armband, this product is seriously missing a beat. More info at RoanRPG.com.

Daemon (Ends: 9/14/2015)
Tabletop RPG v-e-r-y inspired by the “humans with externalized animal souls” ideas of Golden Compass. But with a dark and artistic Euro-Steampunk aesthetic.
I’m torn. This is a good idea and the pages look wonderful, but the language of the project page is quite strange.

Big Game Cat Toys (Ends: 8/26/2015)
Horrifying but cute toys for cats and cat owners. Antelope, but after the lion got to them.
Is there any point to seperating pet toys and human toys in this fandom?

Beasts, Wings and Warriors (Ends: 9/13/2015)
Male nude photography with a generous serving of costuming and make-up effects, including a faun and griffin.
Dings against this project: It’s quite pricy, with a calendar at $90 and book at $260. And I can’t tell where it is on the vague continuum of cosplay/art-nude/smut, it seems to trend towards cosplay more than the other two categories, but it’d be good to know.

Star-Crossed (Ends: 8/25/2015): A sweet animated film about two strange and abstract alien scientists who look for the stars and find love. Pretty stuff.
Oni: A Card Game (Ends: 8/27/2015): A light, chaotic game about Japanese trickster spirits. Fun and cute.
Sparking Unicorn Poop (Ends: 8/31/2015): As a community, I think a glittering rainbow unicorn poop is very much in line with our sense of humor.

Arthur Abridged (Ends: 8/30/2015): A trimmed and revoiced, adult humor version of the PBS children’s show Arthur. What surprises me is that “copyright law coming down on us like a ton of bricks” isn’t listed as a risk. I know Fair Use and this really isn’t it.
The Space Safarians (Ends: 9/2/2015): Sci-fi furry comic series not likely coming to a comic convention near you. If there was a furry kickstarter drinking game, I would be so drunk after the video.
Bucky O’Hare Reboot (Ends: 9/6/2015): This is very on-topic, so I couldn’t NOT mention it, but this reboot of the Bucky O’Hare sci-fi rabbit series and world is a $50K project with no reference to intellectual property, and possibly the worst project video in the history of project videos.

What’s Corbeau Backing This Week?
While I’m really tempted to back the rainbow “Buddy” dog collar, I don’t think I’d get around to using it as a rave accessory at the next furry dance. Super-cute though. I did back the DRACONES supplement—I missed the first campaign, so glad I could support this one on their next go-around!