This week’s illustration is from the children’s book project, Animal Kingdom Construction Co.

Wow! I have no idea what cosmic spigots got turned on, but this week was a flood of interesting projects, after a comparative dry spell. 15 fun projects! There was also a brief flash in the pan when a revival project of the Jazz Jackrabbit video game series got posted to Kickstarter. I was all set to write about it, too! But it was not to be, as the dark goddesses of “Copyright” and “Intellectual Property” whisked it away. Oh well!

Reviews this week: We seem to be having a “Latin” theme: JRPG dreamquest game Sanctum Polis and a long, long review of posthuman tabletop game, HC SVNT DRACONES. If you want me to double the wordcount on a blog entry, give me a really great project with a single mechanic I disagree with…

The Kegel Bear (Ends: 10/1/2014)
A fun read-aloud story about a bear who loves to hug, with built-in pelvic floor exercises for mom! Art by Bill Robinson.
Sometimes I think I’ve made something up and it turns out to be real. Or at least someone else made it up. 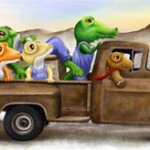 Zombie Bears: Bearlands, Season 1 (Ends: 10/2/2014)
A post-apocalyse hero, the Bear-with-no-name, defends Bearertown from the hordes of cuddly undead…
I am so very done with the zombie meme, but this is pretty nicely done. 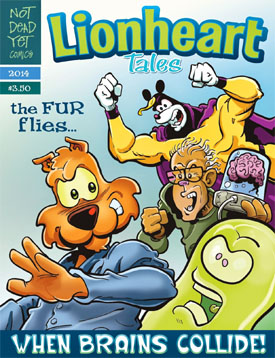 Lionheart Tales (Ends: 10/12/2014)
The continuing adventures of Lionheart, a feline investigative reporter from WAY back in the fandom, the Critters anthology in 1985!
Already past goal!

Claws for Paws (Ends: 10/9/2014)
Premade fursuit parts–claws and jaws and such
So a lot of this is cute, but there’s a really hidulous sculpt that the creator leads with, I personally would not have done that. Just saying.

Magic of Love (Ends: 10/29/2014)
A CGI animated love story: a dog, a fox, an illusionist, possibly a spider.
Eh. This doesn’t look *bad* per se but the business model is ‘$650K goal and Flexible Funding,’ which I reallly can’t encourage.

Big Bad Spirit Wolf Medallion (Ends: 10/2/2014)
A fierce silver medallion for werewolf fans. There is an AWFUL lot of text there for a sculpt of a snarly werewolf.

HC SVNT DRACONES (Ends: 10/3/2014)
Or, ‘here there be dragons.’ A posthuman, anthro sci-fi game.
I like this one a lot, and did a full review of it here. Not a lot of quality furry RPG products out these days. 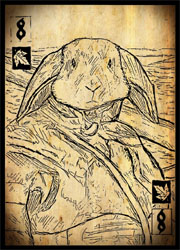 Fauna Wars (Ends: 10/3/2014)
A pretty woodcut-style card game
Rant mode on: This is one of the worst kickstarter projects I’ve seen in a while. Nothing about the game, nothing about the content, and the business plan says $50K for ~88 cards. Wow. No wonder there isn’t a single dollar in it. But the art’s kind of pretty.

Button Fox Plushie (Ends: 10/5/2014)
A cute little bespoke plush fox with button eyes. The swag at the bottom of the page is supercute!

Sanctum Polis (Ends: 10/19/2014)
A 32 bit JRPG style game with elements of investigation and horror: a young shiba Caxton investigates the murder of his dorm roommate in the real world and the world of dreams.
Part of the kickoff for this was a fan-art competition on FA, here’s some of the results.

Solvang Faeriefest 2014 (Ends: 9/25/2014): A colorful, free festival for fairies and the fey-at-heart in California.
Ducksutes Inc (Ends: 10/5/2014): I don’t know what Ducksutes Inc is hoping to accomplish, but sit sure does involve ducks wearing suits, and that’s cute.
Great Inspirational People (Ends: 10/5/2014): It’s not wonderful, but a cute collection of chibi historical figures, with an adorable Florence Nightingale and Pythagoras. Probably your only chance to see a chibi Frida Kahlo, too.
Retro Reload Gaming Museum (Ends: 11/2/2014): A fun walk-through of ideas for a video game themed-business. No donations thusfar and very little original content, but it’s got some fun 8bit imagery and snack food.