In 3038 there are only bears: Anthro Borgs

One of the best things about Nazis–and, yes, it is kind of a short list–is that, year in and year out, they’re a great go-to villain. Like hula hoops and oligarchy, they just keep coming back into style. Even in 3038.

Meet Dr. Bunkenstein. Not misunderstood, just mad. After reading too much Mein Kamf in heil school, he’s gotten the backing of a powerful, shadowy company to support his misguided research–in particular, the development of Soulforce, a unique substance able to create a bridge between the machine and living flesh.

Right away, you can see this isn’t going to go anywhere good. 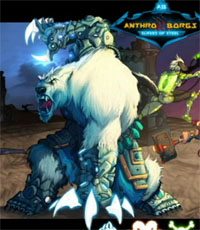 Armed with the ability to create a race of hybrid human/animal/Waring 10-speed blenders, Bunkenstein and his corporate backers at X9 are able to launch their Master Plan (furries, 62% of you will be happy to know it involves mechanized, pantsless tiger guys, and I for one welcome our amoral post-apocalytic Nazi overlords). But four of his original creations–a rabbit built for amazing speed, a tank of a russian bear, a heavily-armed goat, and a skunk with a pair of fearsome biological weapons that are guns not whatever you might have been thinking–pull away from their creator and make a break for freedom.

Here’s where it gets fun: Anthro Borgs, now on Kickstarter, is the action-adventure story of their escape. In this 1-4 player tactical combat game, the characters must battle an environment filled with spinning blades, spikes, pits, and what look like mimics–and each other–to escape Bunkenstein’s clutches.

Game play: Characters have a fairly simple character sheet with a couple of special abilities, damage output, ranged vs. melee combat, damage resistance, and a “ferocity” track (the more damage a character takes, the nastier s/he is in combat…) There’s a little bit of the mechanics in JunkRobot’s video collection.  I’m a little unsure of whether the game is more “player vs player” or “player vs environment,” it’s a tactical game so probably more the former. The spikes, gears, and other traps look like a lot of fun to play with!

Of course the project is mostly going to be about the characters themselves. I’m a sucker for “big and brutal,” and the goat and bear have that in spades. The female characters–well, the skunk is pretty nice looking in some of the shots they have of her, but the rabbit has a distinctly “Tiny Toons” look–it’s that age-old problem that anthro females are prettier than the males. The rabbit, Jasmine Speed, has a bit of a “Barbie goes to war” thing happening. They all have a fun mix of fur, figure, and machinery, good augmented action hero characters, it looks like they’d be a lot of fun to stomp around the board with.

So far as the kickstarter itself goes, it’s a touch complex, which seems to be the rule for minis projects. The game has a lot of add-ons and stretch goals (which are also add-ons, it doesn’t look like the core game is meant to expand, but the project planners haven’t announced any stretch goals yet, I could be wrong.) I’d be a little worried that the core package – $80 “North America” pledge level – is going to feel like an incomplete game without the extra $220 of goodies in the “Australia” set.

I would also suggest that calling a pledge level “North America” or “Australia” is a bit confusing in an international funding platform. Neither here nor there. 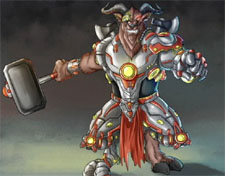 There’s a certain feeling I get looking over the available material on the project that’s hard to shake, and it seems to run through tabletop action gaming in general, that the product is only ever going to see a male audience. Which may be true, the female wargamer is a v-e-r-y rare life form, but that’s not a strength or a marketing platform. The most perfect examples of this are the swimsuit issues put out by Palladium of “RIFTS” “fame.” Now, I don’t expect any action-adventure board game to do well on the Bechdel Test, but when you put the towering, angry, bad-ass Isbjorn the bear and Roderick the goat over Jasmine Speed, who seems to be fresh from either the salon or the lobotomist, it does feel like the label should say “for boys ages 14 and up.” I’m not sure this product is really girlfriendable.

Anyway, that’s not a huge “ding” against the product, it’s an action game, not social commentary. This is a product that’s really aimed directly at the furry demographic, and I hope to see it demo at my local game shop. Good luck, guys!