[Edit: The game creator responded to this message with some clarifications and upcoming news, so make sure you scroll to the end if you’re interested in this project!]

It seems like there’s a three-year cycle of a particular meme, it’s a bit of a hula hoop. I blame Pokémon. It’s the “let’s make game cards of our characters” meme.

After about 25 years of playing Dungeons and Dragons, I really can’t possibly say anything negative about this. Who DOESN’T want to stat out their little avatar and send it into glorious battle? Maybe your fennataur can finally pull out that magic wand she’s been hiding all these years and lob a decent “Flaming Hand of Fiery Doom” at someone. It’s a side of a fursona that doesn’t get to play often, and it’s a compelling little meme. 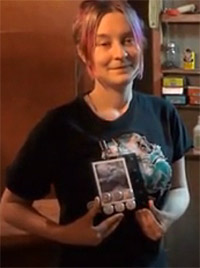 Artist Skulldog and gamer/game store owner Bazil Remblai have collaborated on a logical, and marketable, hybrid of the “stat my fox!” meme, collectible fighting card game, and ubiquitous con badge, to make “Battle Badges,” potentially a perfect microgame to play in the registration line at cons.

Here’s how it works. Some of this is guesswork, but it’s informed guesswork.

From a modest stable of critters–six at first in the starter kit, we see a badger, dragon, and a couple of canines, but the selection should expand over time–pick your critter, printed out on a glossy smoked acrylic and magnetic badge. Find a place to wear it. A shirt would be a good choice. Your boxers would not be a good choice, unless you’re playing “strip battle badges” and are going for a special bonus round. I don’t know, that may be in the advanced rules. 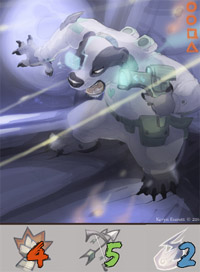 Each critter has some baseline stats–all of them have a score for brawling, ranged combat, and magic. Those numbers are concealed with magnet buttons. Blaster badger here is pretty good with his fists, GREAT with his gun, not so hot with the magic missiles. In a fundamentally “rock paper scissors” type contest, you pick one of these three stats, rochambeau it out (ranged beats brawling, brawling beats magic, magic beats ranged), and the winner gets a +3 boost to that particular stat score–compare stat scores for the winner. Three rounds is a match (I think–there’s a hit point system of heart tokens that might shuffle that up a bit.)

Simple enough! But for customizability, there’s a handful of special tokens (at least 16) that shake things up–special kinds of attacks, defenses, and effects that modify stat levels and game play, keeping things interesting and rounds unique. Not every character is equally effective with the various types of special tokens, so that’s another place where your choice of characters impacts play and strategy.

For a quick five-minute game, that seems pretty sound! An easy mechanic, easy game play, and just enough pieces to fill up an oversized badge, and not a lot more. No dice, none needed. It’d be good to see how the special tokens affect game play, that doesn’t seem fleshed out yet, but knowing how CCGs work, one can imagine the basic idea pretty clearly.

So, big thumbs up: an idea with an obvious and unexploited niche (short interactions in conspace), high visibility (badges are about as easy to spot as could possibly be), and super-plus-one, an invitation to interact with strangers in a game-time way. Neat! It’s a social tool as well as a game!

Conceptually, I like this product a lot, but there’s a few big obstacles.

First, saturation. For a social game like this to take off, it’s going to take some market penetration. This is the classic “video phone” problem (an obsolete example now, I guess, but it used to be valid). You could only use video phones if other people had them, so under a certain threshold, there was no point to owning them–a doomed technology, until Ipad broke it open again. If I never met any other players, there’d be no point in having a badge, and it doesn’t seem like a game that you could just buy and play with your friends at home. It’s reliant on conspace and not knowing your opponents.

Secondly, the starter pack seems to be a problem, and in part it’s tied to the customizability of the game. At $40, it’s a price point that I’d associate with a full set, not a starter pack–and nobody’s buying it yet. Of course, with stretch goals enabled in the Kickstarter that $40 could be more attractive, but still, it’s not the everything pack (and the team hasn’t mentioned the stretch goal levels yet, so I’m not sure how meaningful this is…play the system, guys, you’re missing an opportunity here!) Badges are representations of self, so you’d hope for something that was…well, kind of like you, right? 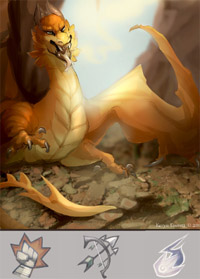 Maybe I’m overstating this. If the point of “Battle Badges” is the “Battle,” it doesn’t matter, just pick one that’s fun and fits your playstyle and personality. If the point is “badges,” having only a small harem of options is a problem. I suspect there’s an “in between” place that most participants would want.

At about 80% of goal after only three days or so, the campaign looks like a success, but in this case, I wonder if it truly is. Most of the funds have come from the top tier reward, dinner with the artist and–here’s the important thing–a custom, “your face here,” badge. The success of this kickstarter seems, at this time, to be tied to personal time with the artist and a unique representation of your character–prioritizing “badge” over “battle.” In a game needs a certain level of saturation to be playable, and assumes a certain level of genericization to keep play affordable, and indeed meaningful, to the players, this campaign may be able to succeed without actually being a success.