Somewhere in New York, there is a rampaging chihuahua man-beast on the loose. Go and destroy, my shivering, pop-eyed Mexican cousin. Send me a postcard. 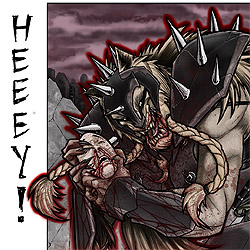 “Beast Mode” is a comic in the “alien invasion disaster” mode. This time, instead of reanimating the dead, the plan is, thusly: green space rays turn animals into half-human killing machines. I haven’t worked out the fine details yet, but the ray also seems to give them massive spiked shoulder pads. Lieutenant! Fire the Warhammer 40K beam! New York needs padding!

Anyway, Beast Mode is the first of a six-issue series focusing on this alien invasion. Art is by Alfred Carrillo, AKA “TwistedxSkillz,” and amazingly this seems to be his first time out in comic format–I’d love to be able to find out more about him, but his DeviantArt page is kind of spare. Pity! The artwork in “Beast Wars” is really something, and the Kickstarter has several preview pages from the first issue. This is actually the second tilt at the windmill for Beast Mode, so you can get even more gore-splattered anthro badness on the previous “Beast Mode” crowd fund effort. 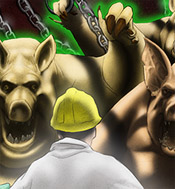 From a strictly crowdfunding angle, this is interesting. I’ve never seen the second stab at a crowdfunding campaign succeed before. The original “Beast Mode” was an ambitious affair, with a range of pledge points–including a “your pet in BEAST MODE” sketch or walk-on role. And they did pretty well! Conservatively, $4000 was pledged (I’d question that pledge at the $1000 level because of the “Enick Farhan” scams that were running at the time). Anyway, for a first time effort, that’s a really good result, even if it didn’t meet goals!

This time on the merry-go-round, Carrillo is asking for a MUCH more modest $500, purely for print costs on the comic itself. I’m honestly a little surprised that the pledge points weren’t more ambitious, sketch commissions seem like a legit way of increasing pledge income.

[ed. note: you know, I could be wrong. The original pledger dollars on the first kickstarter effort map out really strangely, the numbers don’t add up well. After the first go-around, Carrillo may have decided that “short, sweet and simple” is the way to go.]

Anyway! Gore-splattered action fests may not be everybody’s cuppa, but if you’re okay with a certain level of horror and grotesque in your anthro–not uncommon in werewolf art, and werewolves get a lot of fan service here–this looks like a pretty good romp. It also plays into the Kickstarter vision of “new artist seeking funds” that’s really at the heart of crowdfunding for me. If you like it and want to chip in, give a few extra dollars, because the $500 goal probably doesn’t scratch the surface of what’s going into, and already gone into, the project.