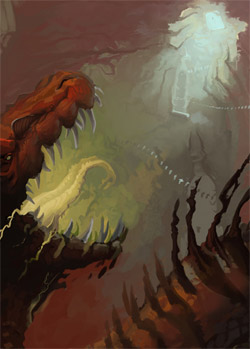 An illustrated story of a spirit’s journey from hell to humanity, full of dragons…

The author/artist Andrea “Firefeathers” Radeck throws out this glib description of her epic, 150,000-word series: “[It’s] about a spirit trapped in the body of a demon-monster, harased by other demons for not being evil enough, and a commercial exorcist who’s just trying to do his job .” Which seems like a fine place to begin talking about this story of dino-demons, heaven and hell, and ultimately, humanity.

Clearly starting her career as a possible allegory early, the protagonist, Neri, begins her existence–life?–as a tabula rasa, a blank slate, somehow manifesting in a wasteland inhabited by skeletal monstrosities and angry–and hungry–demons, a darkly surreal beginning straight out of Hieronymus Bosch’s hell. After that, it gets weirder, Neri merging with the beast that devoured her, a powerful (and possibly fire-breathing) carapace around a developing soul–in a very hostile world.

From there–though I haven’t had a chance to read the dragon-sized corpus of Radeck’s book (although you can! Check her Tumblr and preview to your heart’s content!) and I’m guessing here–Neri’s journey carries her out of hell, through several dimension of the afterlife, and into an antagonistic demi-romance with a professional exorcist. You know, I’m probably wildly off-base here, so maybe you should just go look at the pictures.

I love the pictures.

The smouldering dino-dragon that is the main character is really beautiful in a blocky, “gnaw your head off” sort of way, appealingly stumpy and massive, not quite a European dragon unless one had an illicit relationship with a pit bull. And yet, the combination of monstrosity and simplicity melts into some perfect images–like the picture of Neri seeing the stars for what must be the first time.

As for the writing, well, it’s pretty strong. It’s first-person, not everybody’s cup of tea, and that narration-intensive mode of writing can turn to serious, indeed memoiresome, self-reflection. For that, the writing’s engaging and pretty sharp, not overly first-novel scented or cumbersome. If it’s a little dense, the heavily-illustrated version, coming soon if Radeck makes goal, should be a strong 80-pager, pictures lightening and informing the text. Looking forward to it!

I don’t have a lot to say about the Kickstarter itself, which is pretty textbook–ebook, hardcover book, prints and bookmarks and commissions and damn cute buttons, the kind of thing you’d hope for in a kickstarter by a furry maker type. Between Radeck’s tumblr and FA gallery, there’s a world of things to explore and way to interact with and get a sense for the artist, so look, get informed, and give some thought to that “hardcover” pledge point.