I was pretty sure that this week’s main post was going to be about bears. 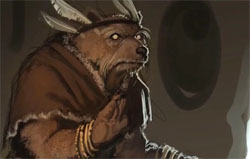 In fact, I kind of thought it would be about “Bear Senpai” (Kickstarter ending 10/9/14), which has the potential to be a really good joke–a bear dating sim, where you flirt with, say, polar bears. But it looks like it isn’t going to lift itself above “pretty good joke” into actual fundraising territory.

Witanlore has the potential to be one of the prettiest games I’ve seen on Kickstarter in a long time. It’s driven by Unreal4, so unlike a lot of the recent “develop this entire video game from the ground up” crowdfunders, this one’s got a firm starting position, working with a well-supported platform instead of building from scratch. Hopefully Witanlore can emerge from development looking fresh instead of derivative–the concept art looks pretty exceptional, anthropomorphic bears with tribal markings and costumes, rich backgrounds, stoic polar bears, mystic-warrior grizzlies, pandas so zen they may have smoked something illegal, and what looks like a steampunk zombie wolf.

All video games released past 2015 are required to use steampunk zombie wolves in some capacity, for proper meme compliance.

Plot in brief: You are a young Ursine, just on the brink of adulthood. Traditionally, all Ursines go on their visionquest, a fairly cut-and-dried operation–fast for a few days, if you’re a panda smoke more of whatever you’ve been smoking, and then go off into the Dreamtime spirit world, meet your god–not GOD, but your tribal house god–get a few useful pieces of helpful life advice, come back, everybody has a big seafood dinner. This time, however–you ARE the lead character in a video game–your divine program guide is interrupted by visions of a shadowy, malevolent figure (hint: steampunk zombie wolf), an ancient mcguffin, threats to clan and home…all that good stuff. After that, journey of exploration, deep dives into tribal history, fighting against prophecy, and possibly looking beyond the little island the Ursines call home.

And you look pretty damn awesome doing it. 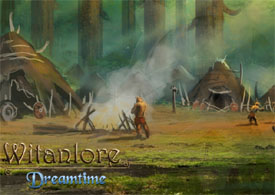 Looking at the kickstarter itself, one major point going in its favor: instead of bankrolling the entire game, Druid Gameworks is focusing their campaign on: art, specifically freelance artists for character and concept art (which I guess is most of the art besides landscape…) With a limited scope to the campaign they can have an attainable goal of $9000–it doesn’t preclude higher goals, but it gives a smaller number that supporters can feel confident in backing.  (On the other hand, the rewards lack a certain special sparkle–mostly standard swag and game access. The tee at the highest possible level of support seems just a bit “an hour in the ball pit” to this dog….unless it’s a really good tee.)

Now, if we’re done BEING bears, maybe we can read about them.

I don’t really have a whole lot to say about Bear Book except the screamingly, “read the Kickstarter” obvious. Written by Gloria Bowen and illustrated by Kris Lewis (AKA “Mythmeoi“), a Disney-esque illustrator with a great sense for motion, wildlife, and disgusting cuteness, Bear Book is a children’s rhyming book loaded with bears from around the world. If you want cute, and if you love bears, there is no shortage of either in Bowen’s project. 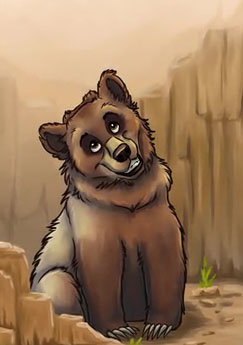 This should be illegal.

The kickstarter’s standard for a children’s book launch–though it does something that I think you couldn’t do until Kickstarter2.0, which is giving product away to a good cause–the highest pledge levels ($100, $350) are more about giving the book away rather than cool swag, sending copies to libraries, community centers, and so on. It’s nice to see a little bit of outreach in crowdfundingland! 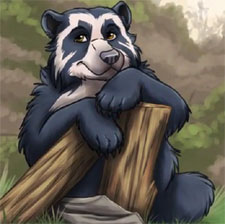 Overall this project is short, simple, and self-explanatory, but the video’s worth a view for the absolute, unadulturated cuteness of the thing. Unfortunately there’s not a lot about the language of the book on the project page, but the artwork has a lot of heart.