Survival-Horror Comic: When the furpocalypse breaks over Pittsburgh, there will be no survivors…

Dawn of the Furries 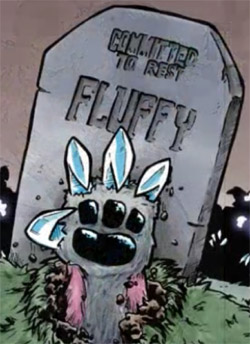 If you’re safe at home reading this, be glad you didn’t go to Anthrocon this year.

Either ironically or appropriately, “Zombie” is the meme that just won’t die. The Zombie Apocalypse is an end-of-days scenario for the common man, It transforms everyday life into a horrifying scenario of shambling terrors: city streets become dark and alien, and Joe Citizen looks in despair as the world he thought he understood becomes a surreal waking nightmare.

Unrelated, Anthrocon 2014 was pretty cool, and if you’re there next weekend for AC 2015 look for artist Jeff Outlaw in the Artist’s Alley. Furries, it seems, do have a sense of humor about the fandom. Last year Outlaw launched his indie comic series Dawn of the Furries on Kickstarter, just passing his goal. And there was some tension. He asked himself hard questions like “how will furries feel about a comic that depicts them as destroying Pittsburgh? Will they take it as an insult?”

Apparently not. [Editor’s note: I was going to insert a picture of macro furries trampling Pittsburgh into the ground, but I can’t find one. I can find a lot of evidence that macro furries really…love…Pittsburgh, but I want to keep this post worksafe.]

Anyway, zombie fursuiters on aisle 4! If you’re at AC, look for Jeff, and ask him about his new project, Dawn of the Furries #2. Or if you aren’t going to Pittsburgh, because of financies, time, or concern for life and limb, check the DOTF art tumbler for sample material and some color work!

Here’s the micro: The main character, Ethan, is your typical Pittsburgh cubicle farm employee, mucking through life with his friends, sort-of friends, and possible dates, when HELL BREAKS LOSE in the form of rabid, mindless, razor-clawed fursuit monstrosities. One bite and Pittsburghers are transformed into these fluff-leaking, deeply uncute beasties—

Jeff, I’m pretty sure you’re reading this, and given how expensive fursuits are, I want you to know this doesn’t seem like that bad a deal.

Anyway, these murderous zombie costumers sweep through Pittsburgh, and life for Ethan turns into a grim game of survival as he and his office colleagues fight for their survival in a world where death could wait around any corner—death or, arguably, worse. We don’t know, it’s debatable. 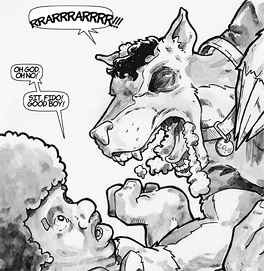 Things are looking good for Dawn of the Furries #2, which launched today and is at about 20% of its modest goal after its first few hours of funding. Looking at the Kickstarter pledge points, one thing really stands out—custom art at only $35, and “your rabid fursona in the comic” at just $110. Custom work is  a staple of the indie comic kickstarter, but not usually at such a low price point!

So, check it out. The plot’s a little Shaun of the Dead, a little George Romero, and the art’s excellent horror/humor, particularly given the low goal for the project! Here’s hoping for a successful campaign, and maybe a deluxe graphic novel down the road!