Take the mix-and-match collecting madness of Metroid: Samus Aran, the boss-battle structure of pretty much any MegaMan title, the graceful and elegant moves of Banjo-Kazooie, a dash of Earthworm Jim’s humor, and just a pinch of Mexican “Luchador” wrestling. Roll generously in wolf fur and serve half-baked. Hello,  Lobodestroyo. 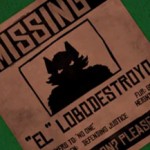 Lobo is a platformer/collectathon game straight out of the Nintendo 64 period. The legendary “El Lobodestroyo” is the guardian of Costa Lucha, an island prison for mad villains–a hero and a champion of JUSTICE. You, unfortunately, are not him, nor any of his more talented brothers or pack members. You’re Mutt, the somewhat dim runt of the litter. But when the villains break free, the pack vanishes, the awe-inspiring trophy belt is scattered to who knows where, and the island is infested by angry, evil chihuahuas (who actually are more pathetic than you), Mutt is there to bounce, tumble, and blunder his way to something resembling a triumphant rescue.

What’s to like–well, for all his retro-rendered clunk, the main character has a lot of amiable charm. He’s appealingly goofy, and would have fit the aching, wolf-shaped void between Starfox and Sonic. It’s loaded with anthropomorphic villainy, and I’d love to see what some of the Big Bads look like fully realized. The developers seem to have a strong sense of humor (will it translate into the game? That’s one of those unknowables…) And the soundtrack from Gooseworx sounds like it’ll be a very good thing, from the artist’s clips (campy retro title sequence here). 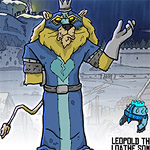 Concerns–can a game be too retro? I was a fan of the source material back in the early 90’s, and I’m totally in favor of beating up bosses and stealing their costumes for special powers (in fact, it cost me my last job.) But looking at the screenshots and such, there’s a cynical part of me that wonders if putting the word “Retro!” in big letters is a smokescreen in front of an underfunded graphic department. Hard to say–only game play and a look at the final product would answer that one.

Visit the page on Kickstarter, though, and take a look at the trailer video. Good sense of humor, comic timing, and a nice look at the game in progress. Worth the time even if you’re not able to chip in.