Explore a virtual world of magic, strange gods, and clashing cultures in what may turn out to be the definitive furry video game experience… 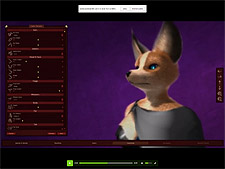 Note: I’m linking the graphics in this article to their originals, so click around. The original illustrations are much stronger than the thumbnails here!

Once in a great while, someone says, “I’d like to do something nice for the furries.”

Treasure those moments. They’re rare things, and Antilia is one of them.

Antilia,  a MMORPG launching on Kickstarter, is set in a unique magical world, one where the gods walk and magic is as much a part of life as art and music. Strange stars hang in the sky during the day, and the night is lit by twisting tendrils of magical light.

Unique, yes, but not without its antecedents. Long-time furry gamers might feel the game’s inspiration in World Tree. There are similarities. In both, the gods are active and vital parts of the world, and walk beside their most beloved species, divine and worldy at the same time, and magic is a simple and natural part of life. Also, there are dragons. The world has the quirky charm of a landscape shaped to tell a story of cultures and civilizations. Not an unfavorable comparison (and I’d be more surprised if the authors had read World Tree, small print and quirky as it is). Antilia‘s world is special. 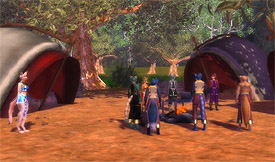 There are, of course, some RPG tropes. Take the race list. In fact, furries should probably jump immediately to the race list, just to make sure they’re properly represented. Pre-stretch goal, options include felo, kisan…ah, to heck with it. Roos, wolves, elk, cats, and foxes, along with their attendant gods (Fox fans will be happy to know that the fox gods live in obscene luxury and vice. Go, foxes.) Together, these are the Taipii, shaped into distinctive strains, but still one adaptable, artistic race. Beneath the ground are…well, not dwarves, but a hard-working race of industrious and occasionally greedy engineers, the Reisuii. Personally, give me a squirrel who’s harnessed the power of STEAM over Torin Oakenshield and his musty beardy cousins any day. The Reisuii and the mystical dragonish Sakii aren’t playable, at least in Antilia‘s initial vision, but they sure are pretty!

The concept art for Antilia is lush, a nicely-realized fantasy world. I’ve downloaded more than a few of them to my “favorites” folder already. As for the game graphics–hard to say at this point, since the game is in alpha test. Apparently, the World of Forra is either a rather dark place, or the gamma on my monitor is wonky. Regardless, I’d rather stare at the swishing tail of the game’s ringtail character than a Dark Elf butt. 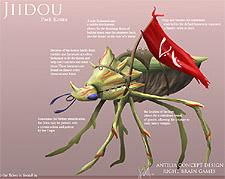 The kickstarter itself is compelling, if a little wordy, but it’s got a lot to touch on–a host of game system elements (journals, party trackers and builders, economies and crafting, screen types, weather, in-character tomes, playing with dolls–wait, that should be “character building,” apologies. The list is long. Plenty of concept art and game maps, too, with nice info-graphics. Also very, very clever: clicking around on the website will turn up a press kit to make spreading the word easier (and thank you so much for that!) So some excellent tools for getting the message out. Hours after launch the game’s already at a tenth of goal, a strong start to what will hopefully be a successful launch.