Epic quest? Is that what they call it? Fantastic Boyfriends

An epic JRPG quest/dating sim to find hot guys, save the world from hot guys. 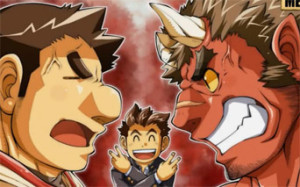 It happens to everyone. You download a fantasy game app, there’s a blinding light, you’re transported to the corner of Waterdeep and Caer Paravel, and a half-dozen hot guys start fighting over you and talking about your “legendary sword.”

Okay, maybe that doesn’t happen, and I’ve been led to understand that dating sims are different from real life in certain important ways, particularly in the number of hot guys throwing themselves at you. That’s probably why they call it “wish fulfillment…”

Fantastic Boyfriends is a mobile JRPG/Dating Sim, currently available in Japan, and crowdfunding for an English translation over on Indiegogo. And it’s pretty darn cute. The basic “You’re the chosen one, Harry!” plot is that [Your Name Here], lonely gay guy, clicks on a link for a new fantasy dating sim, and finds himself in the middle of a fantasy world, quickly in the possession of a legendary sword, and standing by the open gate to a quest to save the kingdom from invading demons. Of course, you’re still a lonely gay guy, but since you’re a chosen warrior from beyond their world, small talk is really more of a formality and “let’s go out!” is the perfect pickup line.

Well, these are gays, so…maybe?

I’m not at all making fun of this game, though it’s got more than a few silly conceits and an internal world where the odds that anyone is completely available and has an avatar with rippling abs is about the same as on Pounced.com. The illustrations are super-cute, with big jovial smiles and big surly frowns, with a look that’s old-school Anime (I think the style is more or less Osamu Tezuka’s, but maybe it’s another artist that’s got the “cute friendly guy built like a smiling brick” thing going on. I confess my manga ignorance here.) 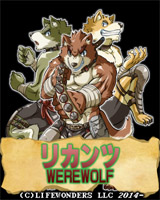 In the prologue video we meet most of the main four–the tough-but-frowny ogre warrior; the noble paladin who’s got a bit of an older-guy thing going on, probably smells like Old Spice and virtue; the “how did you get muscles like that?” bartender; and the beginning of a quest for the dangerously magical dragon/bachelor number 4, Fafnir. You can also take a quick look at the preview trailer, only three minutes long, but sadly just in Japanese. You can also glance over the game’s character profile page, which has some tidbits about the guys you’ll encounter (dragons: amoral but like treasure. Warriors: cheapskates who don’t pay their bartab, but are easy. Elves: Possibly incestuous, no chest. Apprentice blacksmith: EXTREMELY LOW WAISTLINE, though not, in fairness, as low as the barbarian’s.) I’m curious to know if the elf and apprentice blacksmith are available as accessories to go with your Legendary Sword, it’d add some variety to the “built like a brick” look of the characters in the prologue.

Is it furry? Well, yes and no. The artist, BomBom, seems to be a kemono artist, if you skim over his Tumblr—though that’s a pretty NSFW image stream. There’s some anthro imagery, with some werewolves and dragons in various stages of anthropomorphism. Is it relevant? Probably. Games targeted at the LGBT market are pretty rare, and this one’s had some success in Japan–though there’s the open question of whether this form of game is strong enough in America to make its modest crowdfunding goal. Furries aren’t necessarily LGBT, but the majority of us are spread across the rainbow somewhere. 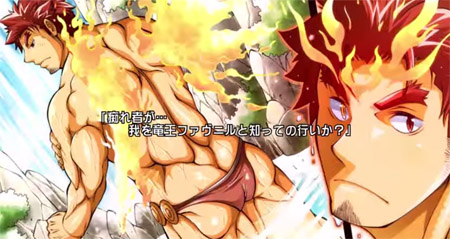 You know, I was going to ask the same question.

I’m a little put off by the backer awards, since you have to go up to $250 to get to a physical product (art book with print version), and the awards at $750 are “book and an illustration of your favorite character.” Unsure what that means. An original piece? A poster? With sharply limited quantities available, they’re likely original pieces, but there’s no elaboration. Further, the game itself is not going to be available as a perk–although as a iphone/android app it’s not likely to be bank-breaking, the game’s plan is to have separate purchasable quests, and it’s hard to guess how much that’s going to cost to get the “whole” story (or at least the one that lets you drag one of those werewolves home.) Still, it’s good to hear that it’s expandable. It does feel like $50 for digital perks and $250 for print is a little on the high side, and it looks like their backers are having trouble swallowing that pill, too. So this really is more of a “donate to support the cause” project than a “give $$$ get swag” project. That’s okay, it’s just worth knowing what model you’re dealing with.