This is, honestly, the best action-anthro artwork I’ve seen in a Kickstarter in the two years I’ve been writing this blog. The artwork is by the stellar Luís Figueiredo, who as you can see from a brief tour of his DA gallery, drank deeply from Eastman and Laird’s Kool-Aid, with a gritty, black and white, high-contrast style that just cries out for a beretta and maybe a soundtrack by Tomoyasu Hotei.

The title character, Flurry, is kind of a marshmallow. Embrace the mystery. 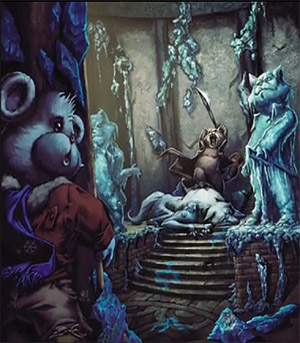 Flurry at left, from “The Throne of Frost”

Backing up to look at Flurry the Bear’s world and the source material created by J.S. Skye. Flurry is, to be a bit reductionist, a stuffed animal brought to life by the magic of Christmas, and still touched by that lingering magic. He’s a cute little booger, appropriate to a tweenies illustrated series. Later he visits tropical jungles, faces an endless winter, gets whisked away to the past and intercedes in a war. Overall, the tone of the series seems to ride the line between kid’s-novel innocence and the kind of darkness you occasionally drop into in, say, Harry Potter (although the series has a “character’s moral development” element that Mr. Potter conspicuously lacked.)

There is a serious tonal shift between Figueiredo’s dark and evocative cover work and the lighthearted images of the earlier covers on Amazon by Alvin Hew.  And somewhere on the path between those two signposts we will find Flurry the Bear and the Tempest Wind, now on Kickstarter.

It looks like the story of Tempest Wind, itself a side-plot leading to Flurry’s upcoming swashbuckling Rising Tide, follows two red pandas from The Book of Snow as they search for a missing friend and uncover a rising evil.

All in all, pretty solid fare for a comic, or a tweenies novel.

While the product looks like it has the potential to be pretty cool, the Kickstarter project has had a rough beginning, and I think I can see why. It’s unclear what the grand vision is for Tempest Wind itself.

Now, time and again, I’ll say “Kickstarter isn’t a shopping cart, but…” and Tempest Wind is caught in that pregnant pause. It’s a comic. It’s an awesome comic, but…but it’s $10 for a digital copy, and $50 for the print version (signed, sure, but that’s a bit steep for 32 pages!) There’s some talk of making the comic a graphic novel if the artists exceed their goal, but at $20K, that looks like a hard road uphill. And thusfar Tempest Wind hasn’t had the burst of first-day funding that we’d want to see in a successful launch.

Flurry 4, The Book of Snow

When I launched my first Kickstarter project, I was collaborating with a talented artist on relaunching her vision after 10 years of her intellectual property sitting on a shelf, and we went round and round on pricing and goal. The story we ended up telling was “we’re creating an audiovisual story with full color artwork, but our goal is going to be to produce an MP3, and we’ll hopefully raise the money for the full, glorious project down the road.” And that’s a very hard story to tell, because you’re describing the moon, pointing at the horizon, and walking to the corner store at the end of the block. And the same road will take you to the corner store as the moon or the distant hills, but…which story is going to get the entire internet on board for the journey?

It seems like that’s where we are now with Tempest Wind, somewhere between the Emerald City and the fields outside Munchkinland. Add to that the ambiguous target audience of the story, which falls somewhere between The Velveteen Rabbit and the original Ninja Turtles, and you have a very difficult pitch to make to your investors.

I feel that if this was retooled as “Awesome Stand-Alone Graphic Novel (PS, it’s a Flurry Story)” instead of “Maybe it’s a comic, and Flurry’s all over it but probably not appearing in it,” Tempest Wind would be a cleaner sales message. As it is, it’s a project with some challenges. A remarkable project, but one with a rocky road ahead.