What a long, cute, road it’s been: Foxtail

After a crushing break-up, a young fox goes on a point-and-click journey into her past.

A part of me did not want to review this one, because the world of 8-bit homage video games is a crowded one. But several of my furry crowdfunding friends have fallen in love with it, and there is most definitely something there to love—a beautiful journey into a forest that’s as mysterious and strange as anything Miyazaki ever put on film, and an antagonist that’s stylish and compelling. and 400-something supporters on Steam Greenlight can’t be wrong. 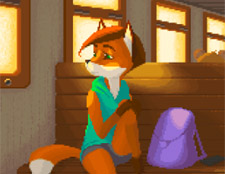 Foxtail is a point-and click journey, the story of Lea the fox on a journey home. Her life at the University of Natural Sciences fell apart after an ugly breakup with her boyfriend. Facing academic failure and expulsion, she goes on a therapy trip to a friendlier place, her grandmother’s tiny mountain village.

This reminds me more and more of some of my favorite anime movies–particularly Wolf Children and Spirited Away. Anyway… 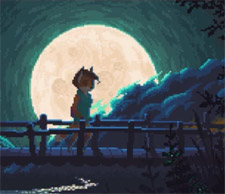 The happy childhood return is spoiled by an NPC with a Quest. Grandmother is sick, and the local herbalist says that the only way to stave off the deadly disease is a potion made from the rare and titular mushroom, Foxtail.

What follows is a solid 12 hours of puzzles, character interaction, things to explore and uncover, and a fair bit of education—after all, Lea is a science student on a mission for an herbalist, so expect to learn a fair bit about medicinal herbs, geology, and anything that’s got levers and wheels to pull and turn.

The game is really quite pretty, with images that are artsy while still being retro. The game is being designed using Wintermute,a platform for developing point-and-clicks (and here I thought it was a world-controlling AI. My bad.)

The kickstarter’s been on an interesting journey. One of the reasons I was biased against it was that it started as an expensive project on Indiegogo, using Flexible Funding—the promise that if we get even $10 of our $65,000 goal, we’ll still make the product. So in some ways, their move from Indiegogo to Kickstarter shows exactly how much of an impact the Flexible Funding trust deficit can create—with Kickstarter’s all-or-nothing funding the project is at twice the pledges it had on IGG. A good test case.

The kickstarter itself is a simple one—not too many perks, and the upper-level ones are thematically appropriate: a bow-tie like the one sported by the herbalist, and a nice traveller’s notebook, the kind Lea takes on her journey. Nothing huge, and a bit classier than a tee shirt.

Unfortunately, Lea’s journey is a long and complicated one, and not just because she doesn’t know what order to click the boulders. The Indie game market is saturated, and similar products with a stronger fan base have struggled and passed into the long night. That being said, Foxtail’s $40K goal is achievable, and the enthusiasm of the Steam community might just help Lea get that mushroom for granny.