This week’s illustration is from the Kickstarter for the tabletop role-playing game, Ponyfinder: Griffins of Everglow

Oh boy, I skipped a week and the skies opened up and projects just spilled out. Lots of good stuff this week–I particularly liked the 30s-retro version of Rocket Racoon from “Guardians of the Galaxy,” check him here–but my enigmatic fascination for the week is going to have to be “Genlab Alfa.” Partially for the badgers, because the badgers are really cute. Partly because it looks like a well-developed anthro post-apocalypse, which are two of my favorite things in a setting.

Mostly because it’s in Swedish.

I don’t really have the energy or perversity to write out a review of a google-translated game. On the one paw, it’s, well, Swedish. On the other paw, I’m not really sharp enough on video games to be coherent on the subject. But if you have a moment, visit the web page, love the badgers with me.

A tiny apology, I’ve been sluggish on new entries, particularly for Patreon pages, and this will probably continue through July. Work is progressing at a pace on my first Kickstarter, a new series set in the world of the 2004 “Kaze: Ghost Warrior” film. More information over on FA, we’ll be launching July 4 at AnthroCon. Come and find me somewhere in the Art Track at 3:00! But the project’s eating into my free time like nothing, so it’s been hard to stay caught up and keep a good variety of content, certainly my goal of two reviews a week has been suffering. Mea culpa.

And now, a bunch of new stuff.

Reviews over the last two weeks: BadFurry’s Guide to the Fandom, which is snarky as heck but I think it’s loving snark. and on the TOTAL OTHER END of the spectrum, the lovingly, gently, achingly hipsterish Horace and Agnes: A Love Story. 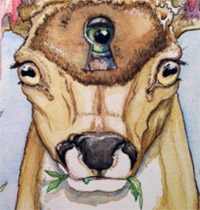 Old timey “Rocket” (Ends: 7/27/2014)
Rocket Raccoon from the “Guardians of the Galaxy” franchise, but done in a snappy 20s-vintage style. Stickers, tees, posters.

Bad Furry’s Guide to the Furry Fandom (Ends: 7/9/2014)
Tweets, observations, and TERRIBLE ADVICE from the minds of The Bad Furry and Likeshine. 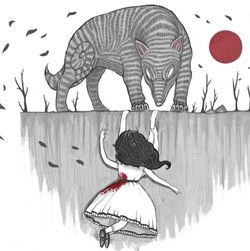 Four Arms (Ends: 7/10/2014)
A story of a beautiful young girl (with four arms) and her huge guardian wolf. A kind of a dark fable.
Somehow, this feels very Russian to me, but I can’t say why exactly.

Spider & Fly, Lion & Lamb (Ends: 7/9/2014)
Okay, it’s a Christian children’s product, but the lion and spider are both well-drawn and appealing.

Malden: Burrito Deathmarch (Ends: 7/2/2014)
Angry, trippy comics about, possibly, a dog and his evil duck. There may be aliens, and tacos.

Doggerland (Ends: 7/9/2014)
A strange surreal fantasy graphic novel, very detailed illustrations. The talking fox and wolf dude are how I’m justifying this one for inclusion, I just like it.
Ooh, $0 of $29000, and flexible funding. Not a very good investment :(

Reynard City: Triple Threat (Ends: 7/11/2014)
I know there are superhero foxes in this graphic novel, I know it. I just can’t figure out how.
More images and info at “Reynard City“, a Saturday morning cartoon in webcomic form. Not in love with this guy’s art, but he’s successfully funded before.

Retrograde (Ends: 8/4/2014)
A sci-fi tale about humans and uplifted dogs, trapped in space at the mercy of aliens.
I do like some of the art and images in this one (or maybe I just like dogs in tight pants). This project’s worth looking at, but I do challenge you to try to get through the end of the video without laughing!

Metal recycled dragon sculpture (Ends: 6/26/2014)
A strange dragon-like monster glowing with internal light, made of a constellation of recycled materials.

Bunnies vs. Zombies (Ends: 7/2/2014)
Super-cute bunnies vs. not-so-cute zombies and slime monsters. What do you do when bunnies interrupt the carrot harvest? Fight back!!
Great artwork, classic post-Tiny Toons rabbits, I swear I’ve seen that artist before. Lots and LOTS of parts in this board game, maybe too many. Got to say, I’m tired of the zombie meme, but I’ll never be tired of bunny warriors.

Ponyfinder: Griffins of Everglow (Ends: 7/11/2014)
A griffin-themed expansion for the Pathfinder world, “Ponyfinder.” Griffins for your ponies for your dungeon crawl, or dungeon soar!
Almost double goal with 20+ days left on the clock!

MonsterSpot Battles (Ends: 7/1/2014)
A big WTF? Something between Pinterest and Pokemon, find monsters anywhere on the internets and battle them in an arena. Strange stuff from monsterspot.com.
I’m still trying to process the weird here.

Mutant: Genlab Alfa (Ends: 7/6/2014)
Tons of anthro characters in this grim post-apocalyptic world, a sequel to Mutant: Year Zero. At least I think. It’s all Swedish. But it made goal, so that’s good!

Five Nights at Freddy’s (Ends: 7/14/2014)
Dark horror/humor first-person explorer–you’re the night guard at a kiddy’s pizza restaurant. You know, with the scary animated mascots? That’s the one.
This campaign’s not going anywhere, but the video’s kind of fun

Cheetah expedition with drones (Ends: 7/10/2014): A journey to Namibia to track and study cheetahs with aerial, unmanned cameras. Hope they move fast…

This is War (Ends: 7/2/2014): I really can’t recommend this one, it’s struggling, and looks a bit raw. But the enthusiasm (and blatant hyperbole) of the fundraiser is amusing. Something something animated music video about griffins.