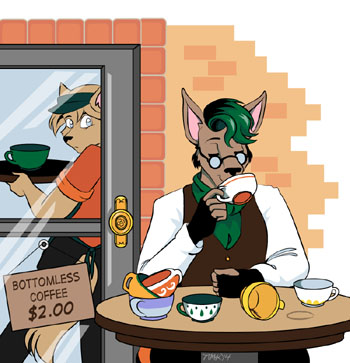 Thank you for the picture, Ellen!

There aren’t a lot of furry slice-of-life comics with staying power. “Fur-piled” had a pretty impressive seven-year run, but beyond that, it seems like slice of life–a genre that thrives on character growth–doesn’t tend to stick around long enough to live to that promise. So looking at the five- or six-year history of Ellen Natalie‘s ongoing webcomic, “The Furry Experience,” is kind of amazing. Long-lived characters, an interesting world, and not a lot of shark-jumping. 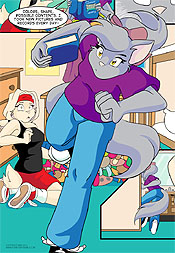 It helps to have a great world to draw on. I’ve reviewed webcomics set in wacky sci-fi space ships and steampunk versions of Portland, and webcomics where gods play dice (funny 12-sided dice, too) with their characters’ lives, where characters are transformed between species, and where magical dragon ladies teleport out of refrigerators. Honestly, those kinds of fantasies have a lot less high weirdness to offer than Salt Lake City, and the kind of real-world drama (and humor) you can get by framing your narrative in a world that’s interpenetrated by the very conservative Church of Latter Day Saints.

Religion can be a touchy subject for furries, and for geek culture in general, because a lot of us feel burned by the church on some level (well over half of furries are queer, and I bet pretty close to 100% of us are dreamers and escapists, so that’s not really a surprise). And some of the story lines of TFE touch on the judgement and tension that a religious community can create (the subtle judgement of the background characters in Diana’s fashion plotline, for example; characters trying to juggle the idea of service to their church, at its strongest in the idea of a mission, with having a secular life and doubts about their faith). Of course, sometimes the Mormon backdrop is just played for laughs (take this sex ed video, for instance…) And the three main characters–Catherine, the artist– 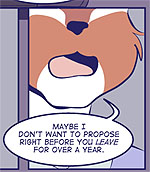 Okay, so, is there an unwritten rule that the lens character for a furry webcomic must be an artist of the same species as the webcomic artist herself? Just saying. Like I can talk.

–Ahem. Catherine, the artist, is a member of the Mormon church, and her housemates Rhonda and Dawn have varying levels of “church outsider” happening. From my limited knowledge of Salt Lake City, and frankly, having gone to college and grown up in the south anyway, finding your place in, out of, or relative to a church is a part of growing up, particularly during those weird early 20something identity periods. Regardless, it makes a fresh setting compared to the “oh, whatever, anything goes” backdrops of a lot of strips. 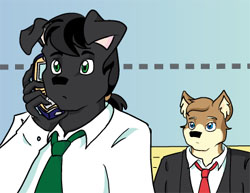 The title “The Furry Experience” is kind of an interesting one–I had a little bit of conversation with Ellen about her time in the fandom, and it kind of started with TFE–“Better Days” and “Circles” introduced her to the fandom and got her out of an artistic slump, and there may be a bit of autobiography waaaay back on Page 1 (“Why don’t you google for Furries and see what you get?”) A lot of the early material is more about the idea of “furry,” of anthros in general, and it takes a while for the title to get into what turns into its meat and potatoes down the road–college, growing up, the awkward balance between faith and the world. Consider starting somewhere in the middle–around page 170 or so–the artwork is more mature, the plots are stronger. TFE never stops being a humorous web series, but it balances humor with story. I do wonder if, six years after the fact, Ellen might have chosen a different title, though.

Meanwhile, on Patreon, there’s a bunch of different ways to get involved. One of the more interesting ones, if you’re willing to make a substantial donation of $25 a month, is becoming an ongoing character in the comic–walk-on roles in crowd scenes and backgrounds on a regular basis. Searching for your furry alt is like trying to find Waldo, but more gratifying. 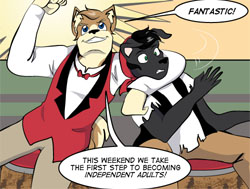 Anyway, check out the webcomic. If you like churchy stuff as much as I do, here’s a good place to begin, with a satisfying argument about gender roles and societal pressure within organized religion. If you like silly stuff, the most recent plotline has two high-quality dumb guys trying to dispose of an old sofa. If you like what you see, follow Ellen on FA and consider a monthly tip through Patreon.  Enjoy the ride!

Images used in this post are used with the permission of the artist for promotional purposes.