A return to exploration, politics, culture, survival, and furries in space… 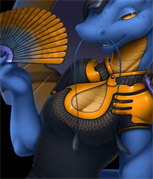 As I have said a number of times, I am a sucker for a good tabletop role-playing game. And the semi-unspellable HC SVNT DRACONES has every chance of becoming the darling of the v-e-r-y small furry TRPG “industry.” The artwork is, pun intended, stellar—loaded with full-color illustrations (much art by Vader-San, if you’re not at work check out his FA) and crisp modern artwork. The layout is clean and modern, reminiscent of the more stylish books from White Wolf Game Publishing (graphical margins, a heavy emphasis on two-page spreads that tell full stories, and layout that doesn’t feel cramped.)

It’s perhaps a little unfair to compare the two, because HSC has a hardcover print-on-demand pricetag of $50 or so, compared to Ironclaw’s…um…$55. Well, never mind. HSC looks forward into RPG history, with online appage in the works and a healthy style-to-substance balance, and its competitor honestly just isn’t that much to look at, with the look and feel of a mid-90s indie game (and, heck, some of the same artwork.) It’s really time for furry tabletop to catch up with the rest of the hobbistry, and HSC is that kind of leap forward. 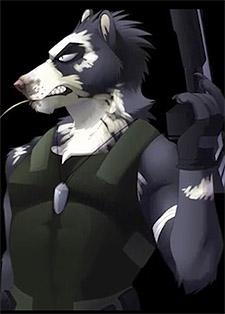 Dracones? You could say I’m a fan.

Now on Kickstarter, and way over goal and tearing through its stretch goals, a huge expansion for the HSC universe.

I’m not sure I want to go into detail on HSC right this minute—if you like, you can read my previous article on HSC, “Here There Be Latinate Constructions,” which talks about the world(s) and some game mechanics. In superbrief, humanity created its anthro “children” as explorers, servants, and colonists, and then promptly ended its own existence as a race. If there ARE humans, they’re whiskered…or robotic. It’s a world with ‘taurs, androids, and the whole spectrum of anthropomorphics. And the newest book, the HSC Core Extension, expands the list, with new families–including…

Okay, maybe that’s more a me thing. There are rodents and ursines, both sadly left out of the previous volume, presumably in the interest of space. Printed page space, not, you know, cosmos space. 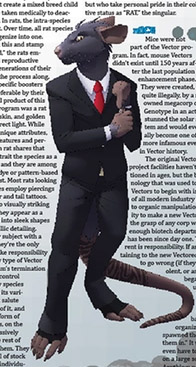 It’s a chock-full-of-weird expansion to an already huge universe, with new races, robot rules, new body types, new dramatic situations and settings, and some new mechanics (I think the video mentioned some mental breakdown rules?) And there’s also a bunch of “FAQ” materials, now that the game’s been around for a few months of community playtesting. All good things. If you missed the first book, and have the pockets for it, there’s a “buy it all” option for $150 with both the previous hardbound, the current hardbound, and other fun print products.

It’s hard to say anything negative about this Kickstarter, and looking back at my earlier write-up, I didn’t have anything to “ding” that one on, either. The prices are a little bit high, but totally on level with any other high-end TRPG—and honestly, their PDF-on-Demand product is amazingly inexpensive ($3? Really? No seriously, is that a typo?) so the whole “price” thing really isn’t that much of an issue. The material is available for next-to-free. I do wish they’d left a few more of the $400 “your character here” level, which seems to have sold out pretty quick. But these things happen.

Okay, go! Back this one so I have some people to play with when I get my copies!