An MMORPG land of predators, prey, and hidden magic…

Conceptually, I love a non-anthro MMORPG. They’re works of art–by their nature and the “dolly dress-up” functionality of the MMO genre they encourage a riot of complex fur design and species twiddling that they become more of a visual collage than ecosystem, which I think is really pretty. 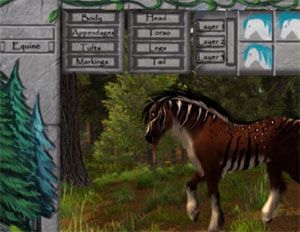 My first brush with the genrette (that should be a word, if it isn’t) was–well, it wasn’t a game, more of a toy or interactive screensaver, Endless Forest, a game where players take the role of non-anthro, non-verbal deer. No chat, just prancing. There was magic, but it was mostly devoted to tweaking your character’s appearance. It was a subtle, beautiful game, and I lost a few quiet Sunday mornings to playing “look, I’m prancing!”

Looking at Isles of Eventide, a MMORPG in development by BloodStream Studios, I’m taken back to that strange, spirit-infested augmented natural world. The concept art of IOE is beautiful–you can follow the dev committee’s group gallery on Deviant Art, some of the art’s evocative of the intricate realism of Dark Natasha (such hair, many braids, wow). 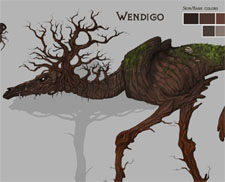 IOE is set in an archipelago, a chain of volcanic islands with wide-ranging climate, weather, ecosystems, from a megafauna-infested frozen north to a fantasy forest, sandy beach, or savanna/plain setting. These islands are dotted with standing stones touched by the lingering magic of a race of ancients. 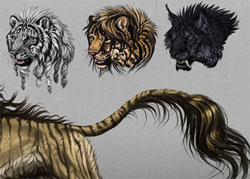 At some point in the not-so-distant past, three great clans of beasts, awakened by the magic of the Mother Tree, came across the oceans to these islands, infesting it with great cats, canines, and equines. Each of these clans has its own strengths (cats are agile and summery loners; canines are pack-oriented, enduring social beasts; equines are strong and sturdy herbivores).

Looking at the game, it seems reasonable to break the discussion down into “sandbox” and “plot.” Both are important in an MMO. We’ll look at sandbox first.

The three clans form the basis of your characters, but there’s enough variety in markings and accessories to change a wolf into a striped hyena, if that’s your thing. While this is a non-anthro game and your choice of accessories is a bit limited, through game play you can pick up armor and costume elements, learn to change your character’s body through magic (the Greater Northern Horned Wolf is an option, with the right spells and base materials). You can pick up pets, and dress and equip them–though why any sane critter would want to be a lion’s familiar, I’ve no idea. And for deep dollhouse fun, the main islands have tiny islets of their own that share their climate, and can be claimed by player characters for personal use and development. Dig a tunnel, dig dig a tunnel. 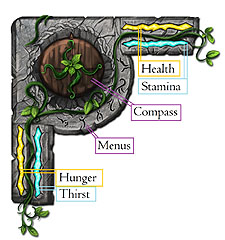 So far as plot goes, the game is spread over a series of islands, each its own game realm, with unique ecology, predator and prey species, magics and secrets, and boss monster. On a base level, some of the game is, well, being an animal–hunting deer, eluding carnivores, finding a home. Snu-snu at $100K.

Much of the game beyond that is in the uncovering of the secrets of the Ancients. Some of the runestones left behind by the ancients contain legends and stories of the ancient world. Some have spells, teaching the ancient secrets of flight, surviving in the ocean depths, and +3 Strength. Others link the islands together and allow rapid travel, and contain information about the land and its inhabitants. In their wisdom, the Ancients even created circles of standing stones to gate in extradimensional horrors, so even a top-level predator may want to be careful where they sleep at night. 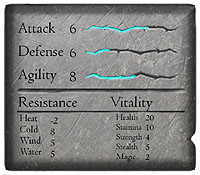 As the game expands–over time, or as Stretch Goals–the oceans will become increasingly playable themselves, other islands will be added (bayou, Asiatic forest, tropical jungle, etc, each with their own secrets and challenges), and new clans will join the island (birds, at first, then we’ll see.) And an engine for heredity and reproduction will get unlocked, so, puppies.

Looking at the Kickstarter, it has a lot of what you’d expect from an MMORPG launch: backer-only in-game perks, an ebook of secrets and easter eggs, your own large islet that can’t normally be claimed, backer-only or even custom character designs (I want my cutie mark, dammit), and at the higher levels, a large island owned by your business (The Sofawolf Atoll, anyone?) and creative input on the islands themselves. 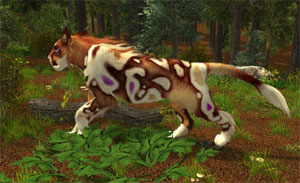 I do like this project, but it’s had a slow start. It’s a new company, and the indie game space/MMORPG playground is pretty crowded, from both a crowdfunding and market share perspective. (For anyone interested in taking a tilt at this particular windmill, I’d recommend “A No-Name Developer’s Guide to Succeeding on Kickstarter.”) 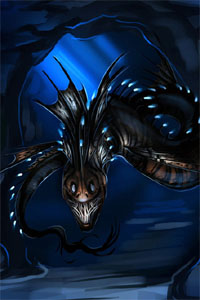 That doesn’t mean it won’t launch or succeed at funding, possibly with a modified relaunch (and some copy-editing, guys, get an English major, they’re cheap and need some love.) Given the archipelagic nature of the game–word drop, 200 points–fundraising themed around the islands might work to create a chain of smaller kickstarters, more likely to succeed. True, it’d be a bit of a lie since the bulk of cost is in game development, but it’d be a good sales story and encourage richer fan development of the islands themselves. Many project creators start small, and build up an audience of friends and followers over a few projects, and some video game’s stories are “Fail at $100,000, succeed at $30,000, re-succeed at $20,000.”

Anyway, take a look at the project. It is quite pretty, bearing in mind that it’s not completed–that’s what the money is for, after all! Good luck!