A young wizard’s quest for an ancient and elusive magical artifact takes him on a deadly adventure, full of strange creatures and stranger vocabulary…

Matlock the Hare: The Puzzle of the Tillan Wand 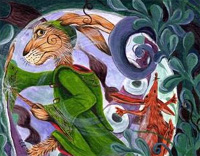 I’m going to start by saying that I really like this project. It’s got great artwork, that hare’s got charisma, and there’s some good worldbuilding.

So I’m going to besecond myself–oh god, they’ve got me doing it now–by adding Dorothy Parker’s immortal lines from her review of the classic children’s book, “House at Pooh Corner”:

“And it is that word ‘hummy,’ my darlings, that marks the first place in The House at Pooh Corner at which Tonstant Weader fwowed up.”

There. It’s been said, and it’s been said about a classic. Now I can let it go and embrace the hare.

Matlock, should you choose to meet him, is the magical hero of Phil and Jacqui Lovesey’s “Matlock the Hare” book series. He’s an up-and-coming wizardly fellow in green robes, in a world chock full of quirky critters, strange locales, and singing ambulatory mushrooms. In his first full-length book, Riddle of the Trefflepugga Path, his quest takes him along a winding, self-aware road to save the little world of Winchett Dale. It’s a weighty 400 pages of fun, with whimsical illustrations…and a glossary.

Um, about that glossary.

There is a proud tradition among YA authors of hand-crafting words. Mr. Carroll added “chortle” and “vorpal” to our lexicon, and had dozens of others that didn’t make the cut. And Mme. Rowling was no slouch for peppering her world with choice little syllable strings.  Dr. Seuss gave us the word “nerd.” So, let the authors flood the land with neologisms…just…keep it legible, okay?

“Guzzword – n. The saztaculous and peffacrumlush nectar of the dale. Much imbibed by us all, especially when feasting. A home supply is essential during peffa-long winter months…” —The glossary of “Dalespeak”

This may be particular whipping horse of mine, I have a weak stomach for cute. And for kids’ literature, a playful approach to language really is great for not only sparking interest, but interest in the language itself. Digging into those colorful, silly words is like eating a mouth full of “Pop Rocks.” Maybe it’s a British thing in particular. Hey, English was their idea in the first place, they can dicker with it if they like.

What really drew me in, though, was the artwork, with its graceful curves, bright eyes, and amazingly baroque smiles. I’m reminded of Toni Diterlizzi’s old twisty-curly style, maybe a little more cartoony, but no complaints. The characters are perfect, glowing and strange. Their occasional appearances in stop-motion are just as pretty.

As for the kickstarter, it’s only day two and they’re about halfway to goal, which is great–this is Matlock’s second full-length book, but he’s a character with a fanbase and history, established through little readers and art projects.  I expect the Loveseys will be gallaphumping their way to a third book in the future, but 500 (!) pages of Matlock will have to keep their fans peffa-content for another year or two.