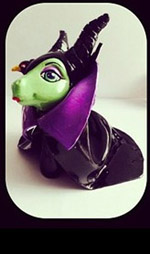 It’s sort of a case of parallel evolution. Once there was a mom who saw some vintage My Little Pony figures, and said, “…I could make art out of that.”

Which, of course, is what the Brony community has been doing with Friendship is Magic for the last few years, though mostly in digital spaces and forums and a big, sloppy fandom. 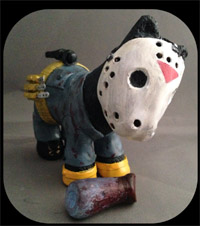 Inspired by the designer toy movement, and her own love of crafting–Rizzo Michelle, the mom in question, had a small business hopping around street fairs and events to share her crafts already–she took the next step and went into the comic fandom with her art dolls, to much applause. And, someday, BronyCon.

One of the highlights of surfing for tangentially furry crowdfunding projects is seeing the voices outside our community and the roads they took to the same destination. I have this image of the big golden gates of BronyCon opening up and pegasi with trumpets tootling Michelle’s entrance, because that’s got to be some kind of a homecoming when it happens. 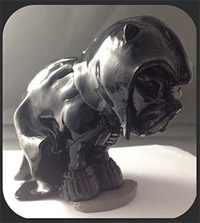 Ultimately, that happy homecoming is the point of Michelle’s Indiegogo campaign–fundraising for supplies and vendor fees, and maybe, someday, the resources to launch that toy line. The work she’s got already is pretty fun stuff, vinyl sculpting, fur and fabric and resin to build out vintage ponies into a wide variety of pop culture icons–a stooped and glowering Darth Vader with a glossy cape and cowl; The Dark Night, Catwoman, and Harley Quinn, even a “Ludo” from Labyrinth and vine-and-fur  Pan from Pan’s Labyrinth. Great stuff, and totally worth a look! 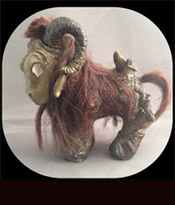 One flaw in Michelle’s IGG campaign is the reward point pricing. For custom, unique pieces of art, the price points aren’t unreasonable. Who am I to judge the cost of a really convincing “Frank the Bunny from Donny Darko” My Little Pony mod? Are there even price guides for that sort of thing? But there’s a bit of sticker shock when you compare to the prices on her website. If you just want a Maleficent Pony of your own, you may want to bop over to The Pinup Chronicles and nab yours there. Of course, crowdfunding is as much about supporting art and artists as it is shopping for Christmas, but it’s worth pointing out the difference. And this may be the only way to get a custom piece. Deadpool pony, anyone?

Here’s hoping we get to see Michelle’s work at Nightmare Nights next year, I really want to get my paws on that Darth Vader!

For the birds: Birdland and the Gothitropolis "Raven" line. This week, two Kickstarters focusing on that rarest of birds, the anthropomorphic, well, bird. One's a graphic novel set in Jazz Age NYC, the other's six inches tall, plastic, and pissed off. But both have an attention to detail...