A game of jazz-age shenanigans, secret agendas, hostile takeovers, and foxes for 2-4 players…

Mob Town is a family-friendly card game from 5th Street Games, seating from 2-4 players (though it may play better with 3 or 4). Players take the role of an up-and-coming crime syndicate, taking over towns one business at a time. Play’s easy, with elements of “Ticket to Ride” and some of the geometry of a streamlined “Illuminati: New World Order.” 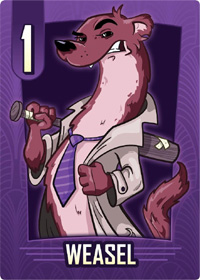 Here’s the furry tie-in: how effective you are at claiming a business depends on the animals in your employ. Sharks are really good at taking over gaming halls, rats really, really love restaurants, foxes love show biz, and so on. 12 of these businesses are put into play, creating a random Anytown. Then the feeding frenzy begins: swap, hire, scheme, buy, and co-opt as fast as you can, because the next card might be the police dog.

A game’s made up of three rounds, each round representing a town the players are fighting over. The lowest-scoring player each round starts the next round, so they get a little bit of an edge to help keep things competitive. Rounds are scored based on how many properties you’ve claimed and what hidden agendas you’ve accomplished, giving you a few different paths to victory. With only a few different card types play’s pretty streamlined; for more advanced play, the “City Limits” expansion adds local landmarks, named personalities, and cities with their own unique rules, and an early Stretch Goal adds a cooperative and solo mode. Another early stretch is the “Daily News” category, which sounds a bit like your typical “events” category.

The game’s rules are simple and easy to pick up, though a little abstract since they tend to rely on card placement and positioning–you may want to check the playthrough video on Bower’s Game Corner to get a clearer idea of game play and see if it’s your thing.

The art of “Mob Town” is strong, cartoony and charismatic. Thumbs up for the fox moll and the weasels, the german shepherd police dog’s a little lackluster, lacking the charming charicature style of the rest of the troop, but nothing’s perfect. Artist Danny Divine has progress art and some of his other work at his personal blog–he’s also got an interview on Hyperbole Games. For not being a card-carrying furry (as far as I know, anyway) the graphics and presentation have some strong fandom appeal. 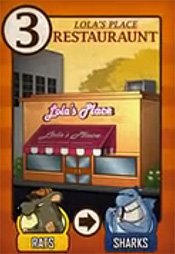 The Kickstarter itself has a clean layout with big obvious infographics, the kind of clear presentation that makes a tabletop game kickstarter really sing. Not a huge surprise, as 5th Street Games has six successful kickstarters under their belt. And somehow, they’re able to offer free international shipping–and I have NO idea how that works. Star Trek transporters may be involved.

The international appeal continues with a little bit of word-of-mouth energy: the more “shares”  the project’s elevator speech vid gets on youtube, the more foreign currencies and police uniforms available in the international releases. Neat–an incentive to repost the video that actually enhances the game!

Those “pros” said, I am a little concerned over the “pledge for six complete packages!” contributor levels, Kickstarter has at times been against the “retail package” style of advanced pledge point, and these could be volatile.

All in all, it looks like a nice game to bring out at furry board game nights, a good edition to the shelf–light strategy, good art, a modest sense of humor, and rules that create a variety of scenarios. With a strong lead (halfway to goal on day two) and a creator with an established history on Kickstarter, there’s not a lot of risk. Definitely worth a look!