Myriad Quest: A Return to the Stars

This is a little more quick-and-dirty than my usual posts, with apologies to a great company, but I wanted to give a shoutout before their Kickstarter ended. 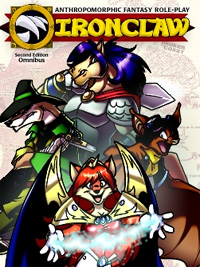 Furry tabletop gamers might be familiar with Sanguine Games. In fact, they might be familiar with it and not know it. SG is the company that publishes Ironclaw, one of the only furry tabletop RPG games to gain any long-term traction in game stores–Albedo would be the only other one I could think of, and while not the original publisher–that honor belongs to defunct “Thoughts & Images” and later Chessex Games–they have released Albedo: Platinum Catalyst, a more recent RPG based on the original comic. It doesn’t seem to be in print, but it’s good to see the intellectual property surviving!

Sanguine’s sci-fi title launched through Kickstarter last year: the atmospheric “New Wave” sci-fi game, Myriad Song. To paraphrase, Myriad Song is a little bit sci-fi, a little bit rock and roll, inspired by 80s classics like Heavy Metal, Dune, and more recent heavily stylized movies like “Fifth Element” and a host of prog rock album covers. In short, it’s probably less important to be factually accurate with the science in Myriad Song as to have the right soundtrack playing.

Now on Kickstarter, Sanguine is back for round two (fight!) with Myriad Quest, a graphic novel from the MS  universe. the book follows two adventurers winging their space prog  (it’s like space opera, but prog rock instead of opera. No, this is not a real term, I made it up) journey across Myriad Song.

The artist is Matt Howarth, whose history with the fandom intersects in several places–he’s been an on-again-off-again artist on Teenage Mutant Ninja Turtles, and his Konny & Czu were recurring characters in the Albedo furry comic anthology series. He also worked pretty heavily on Myriad Song, and his intro comic “Golden Chord” can be read on the Myriad Quest kickstarter updates.

The graphic novel project is worth a look around for fans of edgy and underground graphic novels and indie comix. Is it furry? Not really, there’s some overlap around the edges, and some more in the pledge points (particularly if you’re an Albedo fan).

However, I’m a tabletop gamer, have been for well over 25 years now, and Sanguine Games’s projects have brought lots of my furry friends into pencil-and-paper gaming, which is amazing in our video-game focused, high-energy fandom. For their huge contribution to that narrow little wedge on the Venn Diagram of fandoms that is furry tabletop gaming, I encourage y’all to take a look at this one. I got back from Furry Fiesta recently to learn that Sanguine will be taking something of a center stage next year, so I’m super excited to see what they bring to the conversation in 2015.