Of Hexes and Foxes: Armello

An animated board and card game for tablet and PC, inspired by Dark Crystal, Red Wall, Talisman, and other fantasy favorites

Occasionally, someone will say–of a favorite book, or game, or movie or whatever–that it “transcends genres.” This is rarely literally the case, and yet, here’s Armello, playtested for eight months as a board game before being coded for Ipad and PC.

Take the concepts of a Dutch-style board game–Settlers of Catan springs immediately to mind, mostly because of the hex-based map and the tile art. Take some of the concepts of a Magic: The Gathering/Pokémon “Vs” card game. Take a little of the inventory management and top-down look of a JRPG and some of the modular character building of a tabletop RPG. Throw them all into a genre blender and set to frappe.

It’s a tile-based board game where clouds drift overhead, where your playing piece looks across the kingdom and considers her course. It’s a card game where, just occasionally, the cards shimmer, wink, or drool, and the illustrations are as rich as anything put out by Wizards of the Coast or The Pathfinder Society.

Yeah, I’ve got a video game crush on this product. Apologies if I gush. 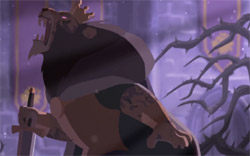 And not only is it pretty, Armello is intensely furry. Clans of bears, rats, weasels, a bunny with a Japanese umbrella. Backstabbing badgers. A mad lion king, allegorically and physically consumed by the same Rot that plagues the land and turns critters into monstrosities. As the king dies, other “loyal subjects” rise to take his place. Maybe they’re heroes, maybe they’re opportunists. Maybe there’s not any real difference.

At its heart, Armello is a complex card game ported to tablet and PC, so many of the graphics are cards, dice, board pieces, and so on. It’s a nicely-executed conceit. Sure, many of the same mechanics exist in any turn-based game, but recasting them as a deck of cards adds a warm sense of game-geek nostalgia and a sense that the game is something other than automated process. Cards are Items, Spells, and Trickery, with a bit of the feel of “Talisman” to them.

The “board” itself is procedurally generated, with seven tile types with different effects on the character, so positioning plays an aspect in the game’s tactics. The politics and quest change with play, so there’s a variety of experience to be had.

The inspirations for Armello read like a fantasy film festival, geekstravangza, and “best of” book display–Redwall, Game of Thrones, Magic the Gathering, Studio Ghibli (you can really see “Mononoke” in the lion king’s corruption), Civilization, Fable, Dark Crystal…it’s a list. 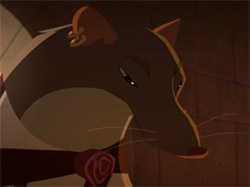 One thing that makes the Kickstarter page compelling, and then raises some irksome questions–the trailer videos (and there are at least three) uses some really nice animation–the style’s simple but moody and evocative, reminds me a bit of Samurai Jack in balancing “stylized” and “detailed.” They’re great to watch and go a long way toward establishing the world of the game, but are they part of the game? Can we hope for cut scenes of this quality? Yesno? The animation and illustration of the game itself is pretty high quality, but the trailers are, well, pretty watchable, but not sure how they intersect with the product itself except to establish mood. Neither here or there, I guess.

Rewards, stretch goals, nothing terribly out of the ordinary there. The magical price point seems to be $55, where the game download comes with a new set of heroes and characters. It looks like backers will also receive (already receive?) access to the Beta release, and there are a few game play videos floating around on youtube. so the buzz is out there and somebody’s played it. Maybe you can play that staff-wielding bear druid sooner than scheduled.