Pandas! To the Air! 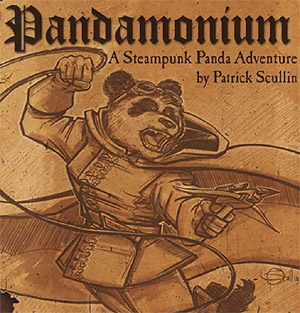 I’ll admit: I’m torn here. The book cover promises that rarest of things, a rock’em-sock’em swashbuckling panda adventure. And you know what? I want to believe. because that’s a pretty awesome panda pirate captain.

Artist/author Patrick Scullin is no slouch on the illustration front. He’s got a nice portfolio of illustrations, with lots of solid “supers” imagery, a few Doctors thrown in there for the Whovians. There’s even a set of ninja turtles–and they’re good! Scullin has a few publishing credits under his belt as well, bound volumes of his nerd-friendly “Super Siblings” webcomic–running almost exactly six years now, pretty strong stuff!

And I want to believe because I love steampunk, and bears are pretty cool, too. An epic battle of Grizzlies vs. Polar Bears, with one lone panda airship captain (all authentic steampunk captains have airships. I hope it’s a Zeppelin.) sounds like a pretty solid story, even if it draws a little heavily on tropes we have seen before (last scion of her race is a touch overplayed in fantasy).

But…but I don’t believe, and I’m sorry. I love the artwork, at least what I’ve seen, and I think the artwork might be enough to carry the project. But the writing’s kind of leaden, exposition-heavy and weirdly lacking in punctuation marks. There’s a PDF preview of the body copy on the Kickstarter page. Judge for yourself.

On the other hand, if bears are your big interest, this might be a rare opportunity–there’s not a lot of bear love in the anthro/talking animal novel sphere, particularly for something outside the Fandom. Check out the preview (I’ve ganked all the art from the Kickstarter site here, there’s not a lot of it…) see if the text and story grab you, and support a solid artist.