A story of violence, love, prophecy, revenge, and violence in a timeless war that you probably weren’t informed of… 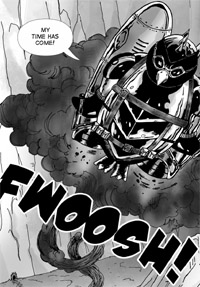 Since the dawn of time–or at least since the supercontinent Pangea separated, marsupials became a “thing,” and penguins were shunted to the frozen south–they have waged a secret war. Two great houses, two great species.

Three visionaries come together to bring you this glorious indie comic tale of vengeful possums and flightless waterfowl most foul. John Bring and Lindsey Calhoon Bring are talent in their own right, TV and comic writers–John’s worked on the TV series “Supernatural”–but series creator Sebastian Kadlecik is one of those creepy polymaths that ruin it for the rest of us, a TV and stage actor, graphic artist, writer, apparently a ballroom dancer, and his résumé says he does a mean cockney accent, but I just had a heavy lunch and am not ready for that.

Deep down, you know the story to be true. Since the dawn of time, possums and penguins have been fighting their endless war. The possum’s ‘Chosen One’ comes soon, destined to overthrow the Penguin Emperor, or die in the effort. Until then, each species “struggles for the upper hand or paw or flipper” in this shadow war, and soon it will boil to the surface, and every human must choose his or her side in the war…and choose wisely, it will likely be the most important decision of their lives, and possibly the last.

Well, I assume that’s the case anyway, the actual “Possums Vs. Penguins” website has been down a while, and I can’t factcheck properly. Though there’s a heck of a lot of traffic and information on the PVP facebook page, previews and leaks and, well, penguins.

The PVP Kickstarter’s straightforward and a solid safe bet. Besides the fact that they’re past goal and into stretch goal territory at this point, most of the work’s already done. The first four issues of PVP are already out the door, and this fundraiser is for the bound print version of same. Still, there’s a future for the project beyond the big bound edition–issue #5 is out, and perhaps the future of penguinkind or possumkind may still be undecided. Every dollar counts. Just write “Possum” on that dollar.