V-e-r-y loosely based on real life events, A Piggy’s Tail, now on Kickstarter, is the action-packed graphic novel story of a good-hearted canine working to rescue and heal animals–and people–in need. 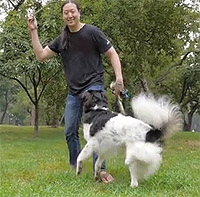 In real life (generally not as fun as the comic version), Piggy was a collie mix that was rescued by the good people of Darwin Animal Doctors, the first animal hospital in the Galapagos Islands (and for a “Where’s Waldo” moment, you can look for the comic version of founders, Tod and Andrea, in the elevator speech video). After being hit by a car, he was rescued by Tod and Andrea, and one of his legs was amputated–after he was shaved he looked like a pink piglet. Thus, “Piggy.” 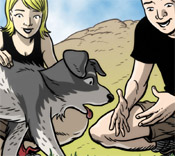 I’m not sure if there’s more to Piggy’s origin story, but his comic book adventures have been filtered through the Ethan Young, artist for the vegan superhero indie comic “Tails” and not too bad at drawing anthros. After a little creative reworking, Piggy gets a few powers–most important to the story (and I suspect, inspired by the real life pup), his empathy lets him feel other creature’s physical and emotional distress, a sort of fuzzy spider sense. (I know, some spiders are fuzzy, but let me have this one.)

He can also fly, which isn’t generally part of a dog’s power set. That’s okay.

Piggy seems like he falls into the doggy mode of “noble, good-hearted, and trusting,” but his malevolent sidekick Simon, a cat with what I hope is a hairball cannon (otherwise it’s launching lumps of green soggy splatty stuff and I do not want to know what that is…) picks up the slack in terms of street smarts and, I’m guessing, one-liners. Together, they’ve got a great team, ready to clean up animal cruelty and undistress distressed children. 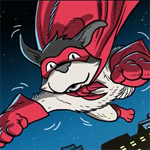 So far as the Kickstarter goes, it’s a nice little package, with some unusual pledge points–there’s the usual swag, tees and stickers and print/PDF, original sketches, walk-on roles in the comic, all those perks that tend to come with a graphically-intense project. But Kickstarters might also get the Piggy theme song by singer/songwriter Rose Lovell, and the Piggy video game. With the Piggy tee, totebag, and theme song, you can totally live the Piggy lifestyle.

All in all, Piggy’s a cute story for young comic readers, and a charming little book for canine fans, well worth a look.