Prelude to War: Rudek & the Bear

Rudek and the Bear

I just finished looking over author/illustrator Peter Donahue’s pitch video for “Rudek and the Bear” and it got me thinking of how rich historical allegory as a genre is for fans of anthropomorphics. One of my more recent finds is the amazing allegorical tour de force, “The Beast is Dead.” I wish I could find a better link to share, but this period graphic novel represents many of the countries involved in World War II with totemic species–Russian bears, Italian hyenas, German wolves, US buffalo. It’s…it’s quite a thing.  Donahue (pdonz on FA) has created a world that’s in some ways richer, dipping only lightly into the way-too-deep allegorical well (clever fox, Russian bear), and telling stories with real character and humor. Telling the sweeping epic of WW2 is a lot easier than opening up a more real, less mythological time and place, humanizing (so to speak) a place and time in the past that’s barely a paragraph in a high school world history textbook. 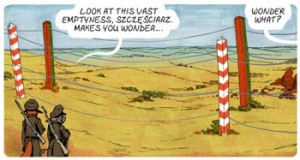 Donahue’s webcomic, Rudek and the Bear, is a sort of gentle military farce, set in a military border post between Russia and Poland, 1929.

Much of its humor is in bureaucratic incompetence and tedium in a pointless border conflict–well, not so much a conflict as an inconvenience. Rudek the fox is a border guard protecting Poland from smugglers and refugees–it may not be glorious, or important, or necessary, or even reasonable, but it’s his job. You can see the weary lines on his face as he deals with military nonsense and bureaucratic garbage, reluctantly dealing with one day after the next.

As a character, Malek is great. Jaded, tired, and totally believable. Somehow the humor echoes “Calvin and Hobbes” more than, say, M*A*S*H, the characters approach their situations with more than a bit of philosophy and whimsy.

There’s a faint note of sorrow that’s hard to escape, knowing the context for the story. What most people know about this historical period is that it ends, abruptly, a casualty of World War II. Donahue talks a lot about his love of that period in his video–the Second Polish Republic had a strong economy and a booming art, film, and music industry. But it is bounded, and it will end. There’s moments that tie into the historical events of the time (1929 is the year the Great Depression imploded, and that hits at least one of the characters even across the ocean). 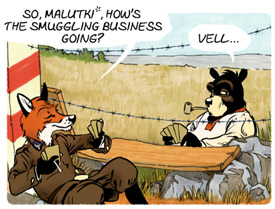 One of the faintly confusing elements in this project is that Donahue is juggling two narratives–the webcomic and its web-to-print version on Kickstarter, and the later story, Zuzel and the Fox, set in Poland in 1939–about as “Eve of War” as you can get. The two narratives are connected, and Donahue sometimes jumps back and forth on which one he’s discussing.

The web version’s pretty cool, with lots of details on artistic process, technique, and a little historical context, but the Kickstarter’s got a lot going for it, too. The artwork for the limited edition graphic novel is higher-quality, and the usual unique commission materials are available at a surprisingly low level, as a part of the $35 tier and upward (you can be a part of the all-anthro group portrait at $35, a sweet digital portrait at $100, and some fun swag besides all that.

Obviously, check out the remarkable Rudek and the Bear webcomic to get a sense for how Donahue’s artwork has grown over the years, the characters, and the delicate humor of the series. And, perhaps, some hints about what 1939 will bring.