What Dreams May Come: Sanctum Polis

Mystery and magic in a world of dreams, and murder in the world of flesh…

NOTE: More than usual, the graphics in this project may change as the project migrates from RPGMaker to Unity. So think of the graphics here as building a sense of the world, rather than truly representing the final product!

NOTE II: If you like this project but don’t have any real $$ to throw at it–or just if you like the project–it’s currently accumulating votes on Steam Greenlight. So go lend them a hand and a vote if you want to see Sanctum Polis on Steam.

This…this hasn’t been a good year for Caxton, a mild-mannered young Shiba Inu. Of recent, he’s been thrown against his will into a tightly-guarded religious reform school, and you can’t get a degree in Computer Science or Radio-Television-Film at Solaris Notre University–no, it’s the priesthood. And there’s a creepy order of robed monk-things that keep you confined to the castle at night. Bummer.

To make matters worse, Caxton finds the body of his roommate, Soul, in the woods, and the aptly-named fennec’s spirit is beseeching poor Caxton to solve the mystery of his murder.

Sanctum Polis: Rest Eternal Memory is a JRPG-style video game now funding on Kickstarter. It draws inspiration from the Persona series, Suikoden, Final Fantasy VI,  and some of the psychological horror of Silent Hill–I feel that most keenly in the game’s weird “cut off from the world” setting.

During the day, Caxton’s world is a reasonable facsimile of normal–he attends a college of a sort, makes friends and alliances, builds rivalries, attends (or skips) class, sometimes goes to detention. Much of the game’s branching plot spins out from these daytime interactions.

At night, it gets a bit weirder.

Fundamentally, Caxton lives in the real world. Sure, 99.9% of the people he meets are anthropomorphic animals, and the occasional human is a reject from the other side of the world, where humans were banished for being terrible dicks (it’s in the minicomic). But it’s fundamentally a non-magical setting–except for Caxton’s ability to explore other people’s minds as they dream. 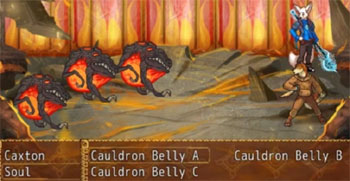 In that dream world–well, those several dream worlds, there’s currently 10 of them in the works, depending on whose mind Caxton wanders through–SP opens into a fantasy world of magic, exploration, and more than a bit of violence. Here the game turns from a real-life mystery to a more fantasy RPG world, with dungeons to explore and enemies to defeat in a turn-based sort of way. The worlds influence each other–Caxton’s grades and world-happiness give him buffs and weaknesses in his night-time dream adventures.

Overall, while it’s hard to get a sense for exactly what the game will look like–one of the expenses the Kickstarter campaign raises funds for is to move the game from RPGMaker to Unity, which will significantly affect the game’s graphic quality–it looks like a nicely realized world. There’s a host of characters to interact with; at least 10 dreamworlds lurking in the minds of the school’s bishops, each with their own interesting look and feel and secrets and psychoses; and an interesting world that’s a little bit fantasy, a little bit sci-fi. Again, that prequel comic gives a few details on the setting, it’s on the SP FurAffinity page.

Looking at the Kickstarter campaign, the Sanctum Polis team–I want to call them the Sanctum Police–started off with a fan art contest,with some nice results in their gallery–great way to build some initial interest!

The kickstarter–well, it’s a bit complex, but that seems to be the nature of video game project pages–lots of different reward tiers, review videos, and such. Many of the rewards involve a “your character here” as an NPC, and those tend to have strong guidelines on the character (backers at the $2,000, for in instance, are advised to be pigs. Boars rather.) I’m finding myself a bit lost in the rewards, but there’s some clarifying text in the body that helps. (It’s generally useful to keep the backer reward bar as short and sweet as possible, avoid repetition, and carry the bulk of the description in the main body of the project page–but there’s a bit of a wall of text going on in the main body. It’s not overwhelming, but there’s a lot to sift through to find your perfect pledge point.) 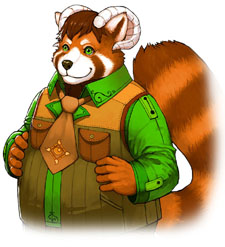 There’s several ways for the community to get involved as well–three characters have already been introduced from the fans, like the incredibly cute ram-raccoon (ramcoon? Great horned red panda?) Ephias Belvidea. Backers can also write in-game notes to Caxton, become walk-on characters in the dreamworld or wandering sprites in the University halls–or even, and this is unusual, become villains–monsters, minibosses, even a major bad guy.

Overall, this project is visually appealing, with some loving anthro art and strong, mature story–although it’s hard to know where the look and feel might evolve as they switch design platforms. The creators’ intention was to create something with some of the great elements of their Crono Trigger-loving childhood, but updated for modern gamers. It seems like that’s an achievable goal.