Note: This is an older post that I’ve updated with new information. FYI. Apologies if there are minor inconsistencies, please review the kickstarter itself for the latest!

It’s been just over a year since game designer Chris Solis launched Terreria Tactics, Terrene Odyssey’s first incarnation. Now the tactical fantasy card game is back, with a leaner plan, pocket-sized price points, and a strong showing on day one. And it’s still a great game. 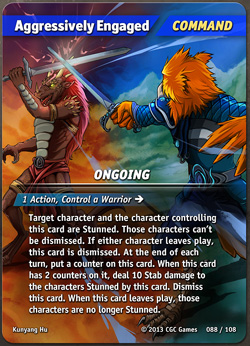 Here’s the principle, one that’s going to be familiar to fans of the early Final Fantasy and Ultima-type games: everything comes down to how you build your party, so your winning plan begins on turn zero. Each player (and the game seats two to four) builds a tight four-member party, equipping each member with an item or a command card. Round it out with a location that subtly affects how your characters spend actions and evolve (the same party might play differently based in a ruined city, windy plateau, or fish-market). Bam, you’re ready for your first skirmish.

Just on the surface, there’s a lot to like. First and foremost, the art of Terrene Odyssey is pretty darn cool, particularly for fans of dragons and raptors. You can take a look at Terrene’s Deviant Art gallery or art lead Megan “Megillakitty” Cheever’s FA page for a few more glimpses of the world. It’s not just lizards and birds of course, there’s also humans, aliens, golems, robots, and extradimensional weirdness. But they’re really good dragons.

The game’s rules strongly emphasize player agency (strategic play) over chance. You can get a good look at them on the team’s youtube channel, or just dig straight into the rulebooks–but really, the videos are a better friendly guided tour, whisking you through game play basics, the ten character classes/types, card types, and some advanced concepts to shake the game up–I particularly like the “supply” mechanic, where as game play moves forward, you start with four one-supply-point proles, then advance toward competent “adventurer” type characters that have a modest array of abilities, and finally, three-point “end boss” characters, giving a real sense of an epic, monster-stomp showdown.

The new product structure is built around two sets of two card selections, built within a broad theme–the forces of one of four powerful nobles. Each package has enough variety to build a few different parties and decks, so you’re able to get quickly into play, but can still pick and choose and build to an initial strategy. The price of $20 for one of these two base game packages is pretty much on par with non-collectable card games–maybe a bit easier on the pocketbook than other games of this complexity.

However, those crazy people that crave, nay, live for, completion will want to get the reasonably priced, grand guignol Big Box package, which has six different “vs” decks, a dozen dozen supplemental cards, and a few other bells and whistles. While I love the shopping cart pricing of the smaller packages, clearly, the completionists are winning this round.

It’s been fun to see this project evolve, to see how the crowdfunding approach has shaped the final vision of the Terrene/Terreria. Originally Solis led with some low-price tchoctchkes that really didn’t dip into the game itself, marketing swag instead of the complete package. The cards themselves started at $40, which was maybe a little high for casual interest. This is a strong medium between them, a playable game at low levels–and furries can get JUST the dragons and birds, and take a pass on all those humans. Even the messaging changed, a little less tactics and a little more story, from a hopeful “about the creator” video with extended examples clocking in at well over five minutes to a concise, 1:40 elevator speech that jumps immediately into the meat of the game.
Anyway, do check out the Kickstarter page, and the videos. If you’re on the fence about this project, check out the print-and-play that’s got a whole bunch of sample cards and rules, enough to get a real sense for how a scenario might play out. Or do what I do, look at the pretty pictures and wait for that darn release date. 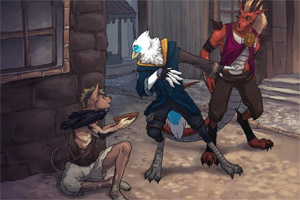 Note: Images used above are included to promote the work of crowdfunding artists, and are owned by the original creator. And special thanks to Megan Cheever for “Gold Plz,” the illustration for this post.