Panthers in a Strange Land: Tribes of Kai

A savage world of pantherine warriors and reptile foes…

A picture is worth a thousand words. Really. I’m trying to find a way to talk about this project that isn’t just pointing at the kickstarter page and shouting “LOOK! LOOK AT THE CATS!!” 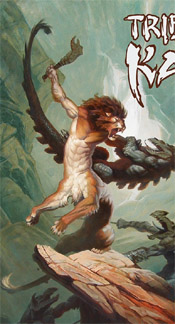 In a world that was born nine months after Frank Frazetta made sweet, sweet barbarian love to Avatar, the five tribes of the Mantakai prepare for the ascension of their new lord–a champion chosen by a savage rite of passage, a test of strength and cunning. The Mantakai are a race of feline warrior “taurs”, with the grace of four legs, powerful claws, and the weapons and trappings of civilization (of a sort.)

Standing against them: the reptilian Tobognai, sleek and dangerous, challenging the dominance of the feline tribes.

The history of Tribes of Kai began back in 1998, in the short story Pridelands in Frank Frazetta’s Fantasy Illustrated magazine–a shot that introduced the Mantakai, their struggle with their lizard foes, and their lush, violent world.

Both Tribes of Kai and the original Pridelands are available with this kickstarter, for the reasonable price of $35. The pair is a rich and moody tour of the world of Kai, exploring the culture of the cat-folk and their struggles. There’s also some expanded material, lots of new art and pinups, by such fantasy luminaries as Boris Vallejo (more on that here). 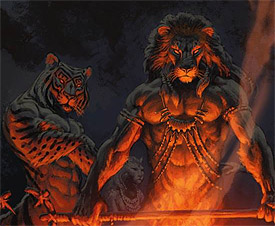 I’m finding myself a bit frustrated with the Kickstarter itself. None of it’s a deal-breaker because of the huge amount of amazing art. You don’t have to look past the book cover to see exactly what you’re getting, though the gorgeous hunting tiger spread rounds out the experience nicely. I had some initial confusion as to what, exactly, I was getting–at first it looked like this was one of those awkward two-stage “at [goal] we’re remastering the original book, at [stretch goal] we’re expanding to 80 pages–no, it’s a new graphic novel and a reprint of the original Pridelands. Cool, but a little unclear if you’re just skimming…and people do skim. There’s a lot of wasted language talking about how much the two principle players–artist Daren Bader and Lance HaunRogue–are possessed of a deep and abiding respect for each other, which I think could have been cut or saved for a follow-up video–walls of text just aren’t that interesting. And the stretch goals could be a little bit more spelled out, price point wise. 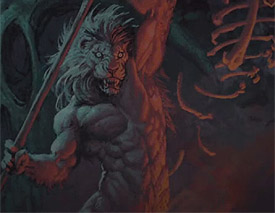 Though they’re good stretch goals–primarily targeted at increasing the quality of the materials themselves. No complaints there.

So, I think I’m done trying to sell a project that so thoroughly and completely sells itself. Check it out. The price is good and the product is fucking awesome. If you’d like to dig a little deeper, there’s a bunch of concept art and illustration on the project’s facebook gallery, have fun.