Fair warning: This product isn’t for everyone. Indie tabletop RPGs (TRPGs henceforth) are a segment of a section of a percentage of the population, and a TRPG that steps outside the mainstream is going to be, by its nature, even moreso. The hobbistry (hobby+industry) solar system can support one or two giant planets, a few smaller ones that still seem capable of generating creativity, and a lot of little things that drift silently in space, the light of popularity a cold, distant, shining point.

That being said, good storytelling is good storytelling, and the ultimate destiny of most indie TRPGs is to get piled up in the bathroom, inspirational reading where most game masters do their best plotting. The idea that any of these things get played is so 1992.

Vanguard: Varmisk Fallen is set around the plane/system of Varmisk (Get it? Varmisk? Varmints?) A colonial world governed by the Confederation. Now, in the wake of a devastating alien attack, the Confederation is in ruins, and its various planets and colonies are plagued by bureaucratic corruption, outside attack, opportunistic criminals–it’s a civilization on the eve of war (Cue the music!)

For storytelling focused on intrigue and personal conflict, this is a great setting. And reviews of some of author Tim Westhaven‘s other products, it sounds like he’s a very strong world-builder and storyteller.

I wish I had more information about Vanguard’s game system. While it’s fundamentally a dice-light or diceless game (there’s some cards for randomizing, but there’s a lot of the old “Amber Diceless Game” mechanic of “you tell me if you should succeed, I’ll tell you if you’re right”), it’s not at all simple, and there’s some strange, fluffy language with mystical overtones that make me back away slowly and put down my cards. While the kickstarter says the game plays for ages 7+ and mature players as well, some of the materials available for review look a little complex. And there’s rules for vehicles and droids, and some strong tactical game play. 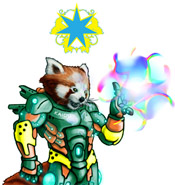 None of this is saying that the rules engine behind Vangard–the “Fatestorm System”–is a bad system, I haven’t picked up the book, and all evidence suggests that Fatestorm does some innovative stuff.. But according to at least one reviewer it’s a rich system that’s going to be difficult for new players, which fits pretty well with what little I can see of the product so far.

I will ding Mr. Westhaven for gratuitous* use of the word “pawesome.”

* Any use of the word “pawesome” is gratuitous. 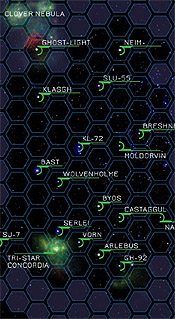 In describing his inspiration, Westhaven says “…think of it as Wind in the Willows meets Mass Effect.” That…that doesn’t seem right. I think it’s a lot more Redwallian–herbivores (and badgers, because they’re awesome) vs. carnivores, the inevitable trope that bunnies are good and anything that eats meat is bad (except badgers).

All in all, the artwork looks good for a TRPG, and it is important to note that art is one of the main things that’s being upgraded. According to the project page, the two rulebooks–basic and advanced play–are both written and playtested, and funding is going toward art and professional editing–both very important things!

If you’d like to learn a little more about the game, the Fatestorm Blog is primarily looking at the Vanguard universe, with some decent excerpts–like the Badgerians here. Westhaven (and most of the TRPG industry) is pretty active on Google+ too, and has a lot of notes on game development and mechanics.

Lots of fun stuff for the kickstarter backer, including the ability to pick and develop new species for PC races, and developing an alien race or NPC for the advanced rulebook. There’s some stretch goal miniatures–and good anthro miniatures are hard to find!

One stretch goal that I really love–as a game master and general crowdfunding fan–is the CIN Database. Basically, every citizen of the Confederation has a unique ID linked to their DNA–and backers of the kickstarter can add their personal “name, species, and vocation” to this database, creating a ready-made collection of DM and player inspirations for creating background characters in a hurry. Neat! It’s a legitimate game resource, and a way to recognize backers.

All in all, Vanguard is a mixed bag. It looks like a good anthro sci-fi game, and it’s been a while since we had one of those (Albedo was before my time, and I was gaming in the 80s!) I can’t tell if it’s rules-lite or just rules-different, but there’s a lot of time spent on granular stuff like ships and equipment, which is one of the telltale marks of an old-school crunchy game–though even as I write that, I don’t think it’s a fair assessment, sci-fi/military tends to be equipment-heavy. The writing on the project page and the art varies widely–both are sometimes playful, sometimes childish, sometimes sophisticated. And it’s hard to know how to dance when that tune is playing.

As always, we have to embrace the risk. The digital release is a very reasonable $20, so if you find the story appealing, it’s not going to break your wallet, and reports from the reviews of some of Westhaven’s other projects say he’s a good read with some solid campaign inspiration.